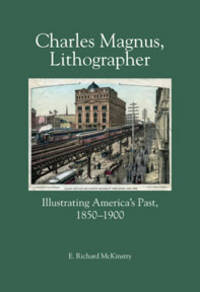 by McKinstry, E. Richard
New Castle, Delaware and Winterthur, Delaware: Oak Knoll Press and Winterthur Museum, Garden & Library, 2013. hardcover, dust jacket. Magnus, Charles. 7 x 10 inches. hardcover, dust jacket. 200 pages. Charles Magnus (1826-1900) was one of the most prolific American printers of ephemera during the late nineteenth century. A native of Germany, he immigrated to New York City around 1850, where he enjoyed a long, creative career printing ephemera such as songsheets, illustrated stationery, birds eye views, maps, board games, puzzles, greeting cards, and rewards of merit. He also published several books and supplied illustrations for others. Given the range of his printing and publishing efforts, it is likely that many households of the time would have had something with his name on it.

This book first examines Magnus as a person, then details the various kinds of items he published, giving a full chapter to his many Civil War era products. It considers his early life in Germany, his family, and his business activities in America. It focuses on him as a businessman who was concerned about making a living to support his family and employees, addresses how he advertised, and discusses how he never relinquished his ties to Europe and his native Germany.

Due to the ephemeral nature of Magnus's imprints, the lifespan of most of his work was short, making them rare survivors in today's collecting institutions. Yet, as examples of the pervasive vernacular visual culture of the nineteenth century, they are important to both scholars and collectors. Documenting nearly a half century of the American experience, they inform us about the games children played, ballads that adults read and sang, the sites of Civil War battles, advertising strategies, and sentiments expressed through valentines.

Throughout the book are over 100 color illustrations of Magnus's work and portraits of him and his family. An appendix lists the items mentioned by title in the book and records where at least one copy of each can be located. A comprehensive index completes the volume. (Inventory #: 110132)
$59.95 add to cart or Buy Direct from Oak Knoll Books
Share this item