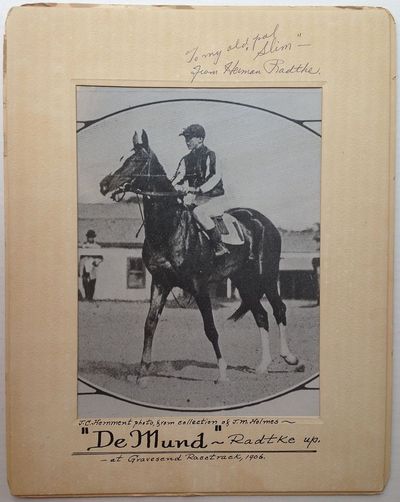 by RADTKE, Herman
1955. unbound. Rare inscribed photograph (on the mount) in ball point pen, no date, circa 1955. This 10 x 8 photo -- a second-generation print of a 1906 image of a youthful Radtke riding De Mund at Gravesend Racetrack in Brooklyn, NY -- has been matted to 14 x 11 inches. Inscribed: "To my old pal "Slim" - from Herman Radtke." Further information listed on the mat indicates that this image was taken by acclaimed photographer J.C. Hemment and that it came from renowned collector J.M. Holmes -- an exceptional piece of racing history. Very good condition. One of the greatest and most successful race horse jockeys of the early to mid 1900s, whose career was continuously marred by controversy. When Paul J. Rainey, the American businessman, philanthropist, and playboy, purchased the race horse De Mund for $45,000 in 1906, he immediately spent an additional $25,000 so he could have a contract on jockey Herman Radtke. At the time, Radtke was an apprentice under contract to racing icon Jack B. Keen. A short time thereafter, he stunned the horse racing world by winning 16 races in a four-day period. (Inventory #: 245329)
$800.00 add to cart or Buy Direct from
Argosy Book Store
Share this item

Chart of the Pacific Ocean

Henry Teesdale & Co , 1841
(click for more details about Chart of the Pacific Ocean)

New York : Farrar Straus & Giroux , 2000
(click for more details about Greene on Capri)
View all from this seller>