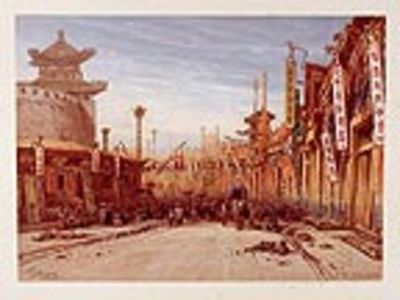 by HILDEBRANDT, After Eduard (1818-1869)
Berlin: Verlag von Georg Stilke, 1864. Colour-printed lithograph by R. Steinbock, after Hildebrandt, cut to the image edge and mounted on card as issued. Very good condition apart from some light soiling and minor foxing in the margins. A charming atmospheric street scene in Peking, from Hildebrandt's illustrated survey of his world travels "Reise um die Erde (Journey Around the Earth)." Born in Gdansk, Hildebrandt was a pupil of the marine painter Wilhelm Kreuse (1803-64) and also studied watercolour painting in the Paris studio of Eugène Isabey for six months. After returning to Berlin in 1843, he met Alexander von Humboldt (1769-1855), who introduced him to Frederik William IV. The latter commissioned him to paint Rio de Janeiro in 1844. On his return, he explored the rest of South America and visited Boston, Philadelphia, New York, Buffalo and Niagara Falls. Hildebrandt was evidently keen on travel, as he also made numerous journeys to many of the Mediterranean countries, Asia Minor, India, China, Japan and across the Pacific. During his voyages, he drew a number of open-air studies in watercolour, a large selection of which were published in 1871-74 by R. Wagner as a collection of chromolithographs entitled "Reise um die Erde." The illustrations were lithographed by R. Steinbock and accompanied by descriptive text by R. Weisse. The present image depicting a bustling thoroughfare in the cosmopolitan city of Peking is most likely from a sketch Hildebrandt executed during his tour of 1862 to 1864. Cf. Thieme/Becker, Allgemeines Lexicon der bilden Künstler, vol 17/18, p. 74-5. (Inventory #: 14132)
$1950.00 add to cart or Buy Direct from
Donald A. Heald Rare Books
Share this item
Donald A. Heald Rare Books
Offered by