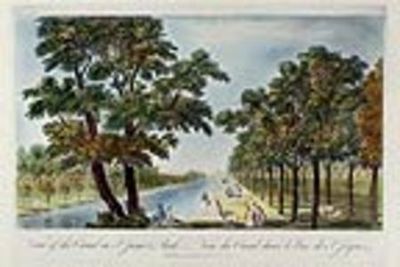 by CANOT, Peter Charles (1710-1777) after John MAURER (1713-1761)
London: Published by Francis West, 1850. Hand-coloured engraving. A later impression. Very good condition apart from some light soiling, a few small tears and a mild water stain in the bottom margin. A lovely view down the length of the canal in St. James Park as seen from Buckingham Palace, from "A Collection of Views of Old London and its Environs," a series of plates originally engraved for the publisher John Bowles in the mid 1700s and later reissued in the nineteenth century by Francis West. This particular plate was first published by John Bowles & Son in 1746. Born in France in 1713, Peter Charles Canot was a prolific line engraver who was active in England beginning in 1740. He engraved copious plates after various old Masters as well as contemporary artists, including Samuel Scott, Thomas Sandby, and John Maurer, and exhibited at the Free Society, the Society of Artists and the Royal Academy, which appointed him an associate engraver in 1770. He was also a member of the Incorporated Society of Artists. The English draughtsman and engraver John Maurer was chiefly know for his various views of London. His services were in high demand by print sellers during the mid-eighteenth century, and he engraved numerous plates for such eminent publishers as Thomas Bowles, John Boydell, and Robert Sayer. Cf. Adams, London Illustrated 1604-1851 193; cf. Benezit, Dictionnaire des Peintres, Sculpteurs, Dessinateurs et Graveurs, Vol. 9, p. 389; Dictionary of National Biography. (Inventory #: 13793)
$250.00 add to cart or Buy Direct from
Donald A. Heald Rare Books
Share this item
Donald A. Heald Rare Books
Offered by