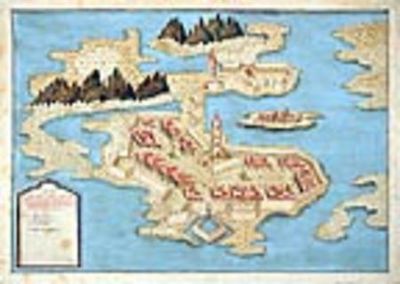 by COLTZ, C.
1760. Gouache, painted on fine watermarked laid paper, in excellent condition. A rare fictional manuscript plan of Fort George on the Island of New Britain, Papua New Guinea. This fascinating manuscript map depicts an English fort on the island of New Britain off the coast of Papua New Guinea. Although the fort is identified as Fort George, there appears to be no historical reference to a fort by that name ever existing on New Britain. In fact the shape of the island and the complicated layout of the ramparts suggests that this representation is fictional rather than illustrative. The buildings, which are all identified in a numbered key, resemble medieval architecture rather than eighteenth century design, signifying that this fine painting is a product of the artist's romantic vision rather than a depiction of an actual place. It is likely that this magnificent painted plan was based on the accounts of William Dampier's travels published in his Voyages to New Holland (1703-9), which recounted his discovery of New Britain and the Dampier strait. Although fictional, this is a fascinating glimpse of eighteenth century cartography, which often relied more on written accounts and hypothetical theories than actual geographic surveys. (Inventory #: 16110)
$3500.00 add to cart or Buy Direct from
Donald A. Heald Rare Books
Share this item
Donald A. Heald Rare Books
Offered by