A Correct Map Shewing all Towns, Villages, Roads the Seats of ye Nobility and Gentry, Wth. Whatever else is remarkable within 30 miles of London 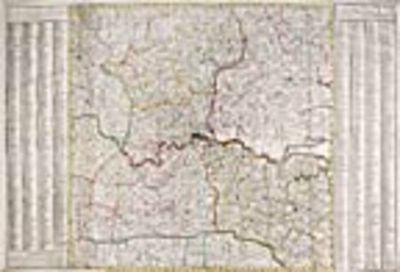 by PRICE, Charles (fl.1680-1720)
London: Charles Price, 1712. Copper-engraved map, with full original colour, printed on laid paper, in excellent condition. A very fine impression of Charles Price's rare map of London and its environs, which became one of the most copied maps in England. Charles Price was a land surveyor and mapmaker, whose maps were nearly all collaborative efforts. After his association with John Senex, he worked with Jeremiah Seller and later George Willdey. During these collaborations he published a number of fine maps, which were all very decorative and extremely detailed. His maps are now extremely rare and are not often found on the market. This is one of the few maps that Price seems to have produced through his own efforts, and it is considered by many to be his finest work. It proved so popular upon publication that it quickly became one of the most pirated maps in England. Henry Overton, George Willdey, Thomas Bowles, Thomas Jefferys, and Laurie and Whittle all printed copies of Price's large London map. Needless to say, the original Price map is by far the rarest and most valuable publication and therefore it is a true collector's item for anyone interested in London maps. With London in the center, the map extends outward for thirty miles in every direction. The course of the river Thames is beautifully plotted and great attention has been paid to the various geographical features of the terrain. The chart is flanked on either side by two long location keys, which list the principle towns, villages, roads, and manor houses. This is a lovely impression of this rare map of London and its environs, and is perhaps the best example of Price's workmanship. Darlington & Howgego, Printed Maps of London circa 1553-1850; 55; Tooley, Dictionary of Mapmakers (1979 ed.), p.518. (Inventory #: 16262)
$2500.00 add to cart or Buy Direct from
Donald A. Heald Rare Books
Share this item
Donald A. Heald Rare Books
Offered by