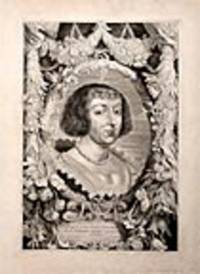 by VAN SOMPEL, Pieter after Anthony VAN DYCK
Haarlem: Published by Pieter Soutman, 1644. Mixed method, engraving and etching. Printed on fine watermarked laid paper. In excellent condition. Image size: 15 ½ x 10 ½ inches. A lavish engraving from a series of portraits of the Hapsburg royals published by Pieter Soutman. This stunning portrait is from a suite of engravings published by Pieter Claesz Soutman. Executed by some of the most noted seventeenth century engravers, the suite is a lavish series of portraits of the Hapsburg dynasty. A prolific engraver and publisher, Soutman began his career as a painter in Ruben's studio. In 1628 he returned to Haarlem and founded his own workshop, which was responsible for training some of the most celebrated printmakers in Holland. Margarita (d. 1672) was the second wife of Gaston d'Orleans, brother of Louis XIII. Her father was Charles of Lorraine. Gaston d'Orleans was famous for continually plotting against his brother and Cardinal Richelieu with other nobles. Hollestein, Dutch and Flemish etchings, engravings, and woodcuts, ca. 1450-1700 Vol XXVII, p. 209, no. 12, state i;Benezit, Dictionnaire des Peintres, Sculpteurs, Dessinateurs et Graveurs. (Inventory #: 15325)
$300.00 add to cart or Buy Direct from
Donald A. Heald Rare Books
Share this item
Donald A. Heald Rare Books
Offered by