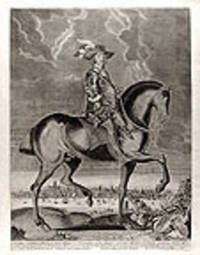 by HOEVE, R.
Published by Henr. Neuhusius Fris. Pensionarius Worcumensis, 1710. Engraving. Printed on laid watermarked paper. In good condition with the exception of two skillfully mended tears across Cromwell's face. Very light crease along middle of image. Sheet has been re-margined with laid paper. Image size: 21 ¾ x 17 inches. This remarkable engraving is an early portrait of Oliver Cromwell, one of England's most famous leaders. This is a commanding equestrian portrait of Oliver Cromwell with a panoramic view of London stretching out behind him. Published by the celebrated German poet Henricus Neuhusius this image provides a fascinating insight into the dissemination of Cromwell's image across Europe. Cromwell is memorialized in countless portraits by both English and Continental artists, and his image continued to be reproduced in print until the late nineteenth century. This rare engraving is an early example of the pictorial legacy, which Cromwell inspired. Published for a continental market, this striking portrait depicts Cromwell as larger than life; both his horse and his body are massive in proportion to his surroundings, creating a statuesque effect, which is visually compelling. Cromwell's body controls the compositional space of the image making him appear all-powerful, and he hold's the viewer's attention with his resolute gaze. Early portraits of Cromwell, such as this, are seldom seen on the market, making this a true rarity and a fine collector's piece. (Inventory #: 14728)
$750.00 add to cart or Buy Direct from
Donald A. Heald Rare Books
Share this item
Donald A. Heald Rare Books
Offered by