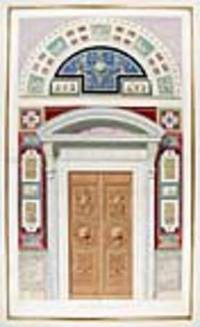 by RAPHAEL. Raffaello Sanzio d'Urbino (1483-1520)
Rome, 1772. Copper engraving by Ottaviani after drawings by Savorelli and Camporesi, printed in light brown coloured ink with contemporary hand-colouring. Good condition. Three repaired tears to the left blank margin. Sight size: 31 1/8 x 18 1/4 inches. A highly decorative print from the famous "Loggie di Rafaele nel Vaticano" series, with contemporary colouring of the highest quality from the golden age of the hand-coloured print. A very fine image from the first part of a work titled "Loggie di Rafaele nel Vaticano" depicting the decorative work executed by Raphael and his assistants between 1518-1519 in the Vatican. This remarkable print, one of the first to be published of the decoration of the Logge on the main storey of the Vatican apartments, was probably planned as early as 1760, but was not executed until between 1772 and 1776. The project as a whole was carried out by the painter Gaetano Savorelli, the draughtsman Ludovico Teseo, the architect Pietro Camporesi, and the engravers Giovanni Ottaviani and Giovanni Volpato. The plate is remarkable not only as the first important visual record of Raphael's work, but also for the quality of the hand-colouring - the work on this image is, in our opinion, some of the greatest to be produced in Europe during the whole of the eighteenth century: the golden age of the hand-coloured print. The whole series was of importance not just for the size and magnificent colouring of the prints, but also because of the influence they had on contemporary taste. The decision was made to "borrow" elements from Raphael's Vatican tapestries and insert them where the original frescoes were in too poor a state to be legible. The finished plates therefore represented an amalgam of design elements presented with a crisp freshness of colour that held enormous appeal and stimulated the taste for the "grotesque" in the neo-classical period. Cf. Brunet IV, 1110; cf. Berlin Kat. 4068; cf. Lambert Pattern and Design (V. & A.: 1983), p. 26; "Raphael Invenit: Stampe da Rafaello" (1985) Ottaviano 17; Raphael: Reproduktions-graphik aus vier Jahrhunderten (Coburg: 1984), p. 104. (Inventory #: 17013)
$3500.00 add to cart or Buy Direct from
Donald A. Heald Rare Books
Share this item
Donald A. Heald Rare Books
Offered by