[Working Proof of a Country Cottage] 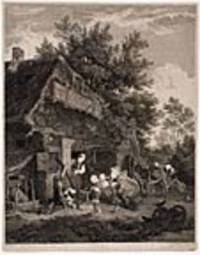 by BROWNE, John (1741-1801) after a painting by Cor. Du SART
1770. Etching and engraving. Unfinished working proof. In fair condition with the exception of being trimmed within the platemark. Laid onto contemporary backing card. Tear along middle of image which has been expertly repaired. Some creases in image. A rare working proof by John Browne, the celebrated English landscape engraver. One of the most esteemed English landscape engravers, John Browne was born in Finchfield Essex, in 1741. In 1756 he was apprenticed to the engraver John Tinney, but then went to work for the influential landscape engraver William Woollett. It is believed that many of Woollett's most admired plates were in fact engraved by Browne. He devoted himself entirely to engraving landscape and genre scenes in particular after works by the French and Dutch masters. In 1770 he was elected an associate engraver of the Royal Academy, exhibiting thirteen plates between 1767 and 1801. This stunning genre scene is a wonderful example of his skilled hand and a rare working proof. This intriguing print shows a unique step in the printmaking process before an image is ready for publication. Before the image is completed, the engraver has printed a trial impression to view this stage of the engraved plate. It is incredibly rare to find prints in this unfinished experimental stage; impressions which were pulled as working proofs are unique and were almost never duplicated. Dictionary of National Biography. (Inventory #: 16141)
$550.00 add to cart or Buy Direct from
Donald A. Heald Rare Books
Share this item
Donald A. Heald Rare Books
Offered by