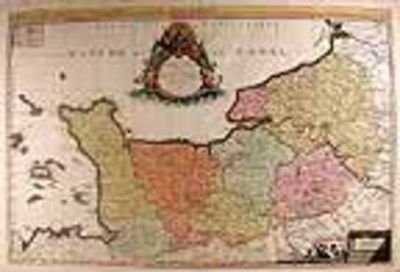 by JAILLOT, Alexis Hubert (1632-1712), after Nicolas SANSON (1600-1667)
Paris: Alexis Hubert Jaillot, 1696. Copper-engraved map, with full original colour and gold embellishment, in excellent condition. A stunning map of Normandy by Alexis Jaillot, an exceptional example with gilt embellishments. One of the most important figures in French cartography, Nicolas Sanson initiated the great school of French geographers. Born in Abbeville in 1600, Sanson established his first printing house in Paris in 1638. He soon became geographer to the king, establishing himself as one of the most influential cartographers on the Continent. He was succeeded by his sons, Adrien and Guillaume, and by his son-in-law Pierre Duval, who continued to publish a wealth of maps using Sanson's name. At the close of the seventeenth century, Sanson's plates were purchased by the influential cartographer Alexis Hubert Jaillot, who continued to publish his maps and atlases under Sanson's title. This stunning map of Normandy is based on Sanson's map published in 1650, but was redrawn and enlarged by Jaillot. It shows the provinces of Normandy as well as the northern tip of Brittany and part of the English Channel. Both Jersey and Guernsey are included as is Mont St. Michel off the coast of St. Malo. In keeping with all of Sanson's and Jaillot's superb maps, forests, rivers, and towns are meticulously identified and named. The map includes an ornate cartouche in the upper section as well as a scale and key. Tooley, Maps & Map-Makers, pp. 40-41. (Inventory #: 16269)
$2750.00 add to cart or Buy Direct from
Donald A. Heald Rare Books
Share this item
Donald A. Heald Rare Books
Offered by