North West View of Windsor Castle, In the County of Berks 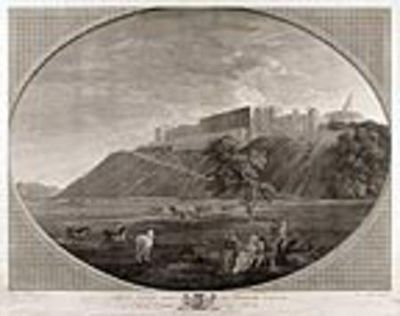 by FITTLER, James (1758-1835) after George ROBERTSON (1748-1788)
London: Published by John Boydell, 1782. Engraving, printed on fine laid paper. Very good condition apart from some overall light soiling, minor creasing in the bottom margin, and a few mild surface abrasions in the margins. Some faint writing in black pen is visible in the top right corner of the sheet. One of a pair of views of Windsor Castle engraved by Fittler after the celebrated landscape painter George Robertson. Towards the middle of the eighteenth century, a trend developed among English artists and printmakers who sought to visually record the natural beauties of England and Wales. Sparked by a sense of national confidence and patriotism, English printmakers began to publish topographical prints of the important sights in the British Isles. In addition to being a visual record of the countryside, they were meant to encourage public recognition of the beauty and history of England. They were aimed at English and foreign tourists who desired a memento of their travels, or at those armchair travelers who collected topographical prints instead of traveling. Trained at the schools of the Royal Academy, James Fittler was a skilled etcher and engraver, who established his reputation with the numerous plates he executed, many of them portraits, after artists such as Delamotte, de Loutherbourg, and Lorraine. In addition to his engravings, he contributed copious book illustrations to publications such as Dibdin's Aeds Althorpianae (1822). In 1800, Fittler became an associate at the Royal Academy, where he regularly exhibited throughout his life. Cf. Dictionary of National Biography; cf. Benezit, Dictionnaire Des Peintres, Sculpteurs, Dessinateurs et Graveurs, Vol. 5, p. 492. (Inventory #: 13705)
$950.00 add to cart or Buy Direct from
Donald A. Heald Rare Books
Share this item
Donald A. Heald Rare Books
Offered by