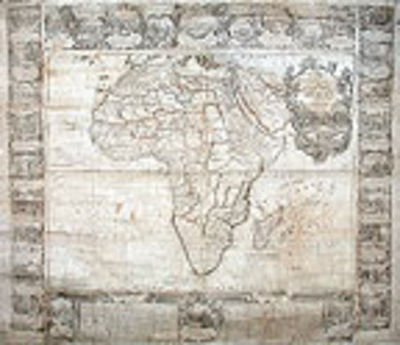 by [NOLIN, Jean-Baptiste (1657-1725)] and Jean-Baptiste NOLIN II (1686-1762)
Paris: Chez l'auteur rue s.Jacques au dessous de la rue Mathurins a l'Enseigne de la Place des Victoires, 1740. Copper-engraved wall map, with original outline colour, of four joined sheets, surrounded by text and vignettes printed on separate sheets, backed onto old linen, with contemporary wooden rollers, overall in very good condition. A rare and monumental wall map of Africa by a great French master of cartography. Jean-Baptiste Nolin was one of the most accomplished and certainly the most ambitious French cartographer of his era. He founded what ultimately became a family empire in Paris in the 1680s. Exceptionally, he managed to marry superlative decorative ornamentation with the serious objective of producing maps that reflected the most advanced rendering of geographical detail. The artistic élan of his compositions evinced a style that preserved the rhetorical ambitions of the Baroque ethic, while anticipating the playful elegance of the Rococo period. His masterpieces, many like the present wall map, were monumental in scale and represented Nolin's desire to overwhelm his competition in what was a very challenging market. Highly controversial, Nolin occasionally described himself as "the Engraver to the King", an appointment of which the royal court was curiously never apprised. In his endeavour to include the very latest geographical details on his maps, he seldom hesitated to acquire information from his eminent contemporaries, most notably Guillaume De L'Isle and Vincenzo Maria Coronelli, Jean-Dominique Cassini and the Sieur de Tillemon. At times these rivals were not appreciative of Nolin's adoption of their intellectual property, as De L'Isle successfully sued Nolin for plagiarism in 1705. However, the larger-than-life Nolin always seemed to transcend these challenges, leaving a thriving enterprise to be taken up by his son. The present map was created in 1740 by Jean-Baptiste Nolin II, largely based on earlier maps produced by his father. Geographically, the map is relatively progressive, however it showcases some rather curious speculations. The coastlines are well defined, having been explored for over two-hundred and fifty years, however, the heart of Africa remains an enigma. In the absence of direct observation, the European imagination was given free reign. In this light, Nolin adopts the seventeenth-century conceptions popularized by De L'Isle and Coronelli that the Nile was somehow connected to the Niger River, even though both rivers flow in different directions to terminate at points thousands of miles apart. Furthermore, the written descriptions of the continent's inhabitants are replete with archaic legends of bizarre and monstrous races. The presented map is an artistically virtuous composition on a monumental scale, the image being surrounded by thirty vignettes that depict events from African history. The focus of the vignettes is on the better known North African regions, however, there is also a great deal of attention paid to French commercial activities in Guinea. Each vignette is set within an elaborate baroque frame of a unique design, and is accompanied by textual narratives. The detailed description at the bottom is entitled "Description Geographique de L'Afrique." The large title cartouche is framed by period rocaille swirls, and is inhabited by an optimistic scene depicting the amicable commerce between Africans and Europeans, as well as a dedication to Louis XV. This wall map is one of the greatest subjects of the Nolins' legacy, not only being a masterful work of art and a fascinating image that tests the very limits of European geographical knowledge, but also a vivid record of a dramatic transitional period in the history of cartography, and of society in general. Tooley, Maps of Africa, p.86, plate 67. (Inventory #: 15517)
$25000.00 add to cart or Buy Direct from
Donald A. Heald Rare Books
Share this item
Donald A. Heald Rare Books
Offered by