This Portrait of Mr. C. Davis, his Majesty's Huntsman, on the Hermit is with permission dedicated to the Right Hnble. The Earl of Errol K.T. master of his Majesty's Buck Hounds 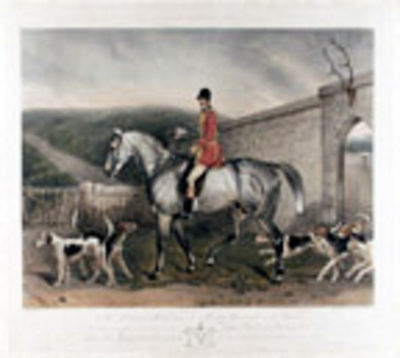 by DAVIS, After Richard Barrett (1782-1854)
London: Published by R. B. Davis, 1836. Hand-coloured lithograph by J. W. Giles. Printed by J. Graf on India paper and mounted on larger sheet of wove paper. Good condition apart from some overall light soiling, a number of mild water stains in the margins, and slight discolouration of the paper due to age. An striking print after Richard Bennett Davis, animal painter to King George IV and Queen Victoria, from the "Hunters Annual" series. A very fine equestrian portrait from a series that eventually included sixteen prints and was issued in four parts. The hounds are also very carefully observed and qualify as canine portraits in their own right. "Richard Barrett Davis was the son of Richard Davis, huntsman to George III's private harriers. Initially self-taught, he came to the notice of the King who arranged for him to be given proper training...He exhibited paintings at the Royal Academy for over fifty years, his first exhibit being in 1802. In 1831 he was appointed animal painter to George IV and later Queen Victoria." (Charles Lane, British Racing Prints, p.98) Cf. Mellon, British Sporting and Animal Prints, p. 63; cf. Schwerdt I, p.258. (Inventory #: 14451)
$950.00 add to cart or Buy Direct from
Donald A. Heald Rare Books
Share this item
Donald A. Heald Rare Books
Offered by