[Cave-In-Rock. view on the Ohio 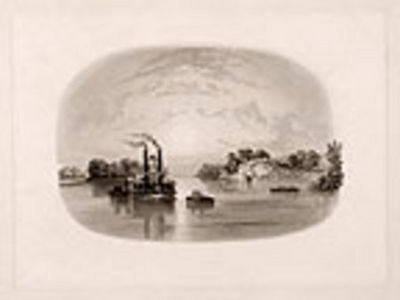 by BODMER, Karl (1809-1893)
Paris, Coblenz and London, 1842. Aquatint engraving by Lucas Weber after Bodmer, proof before all letters, issue with one figure at the rail on the right hand side of the deck of the paddle-steamer, extensive use of aquatint on the river and scrub and small trees next to the boat on the far right. A very rare proof before letters En route to St.Louis, Missouri, Bodmer, Prince Maximilian and Dreidoppel traveled via the Ohio river. About twenty-five miles beyond Shawnee Town, Bodmer sketched this intriguing geological rock formation known as Cave-In-Rock on the Illinois side of the river near Cave-In-Rock Island. The scene also includes an Ohio steamer flanked by two Ohio keelboats, all caught against a late evening sky. Unsurprisingly, the area is now part of a National Park. Karl Bodmer's images show great versatility and technical virtuosity and give us a uniquely accomplished and detailed picture of a previously little understood (and soon to vanish) way of life. Swiss-born Bodmer was engaged by Prince Maximilian zu Wied-Neuwied (1782-1867) specifically to provide a record of his travels in North America, principally among the Plains Indians. In the company of David Dreidoppel (Prince Maximilian's servant and hunting companion), their travels in North America were to last from 1832 to 1834. They arrived in Boston in July 1832, traveled on to Philadelphia, where they stayed with Napoleon Bonaparte's elder brother Joseph. From here they headed west across Pennsylvania across the Alleghenies to Pittsburgh and the Ohio country, visiting all the important German settlements en route. Their most important stop on their route west was at the utopian colony of New Harmony in Indiana. The Prince spent five months there in the company of some of the country's leading scientific men, and studying all the relevant literature on backcountry America. On 24 March 1833 the party reached St. Louis, Missouri, and the start of the journey into Indian country. Graff 4648; Howes M443a; Pilling 2521; Sabin 47014; Wagner-Camp 76:1. (Inventory #: 15600)
$750.00 add to cart or Buy Direct from
Donald A. Heald Rare Books
Share this item
Donald A. Heald Rare Books
Offered by