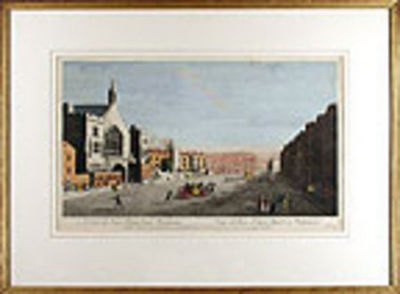 by BOYDELL, John (1719-1804)
London: Published by John Boydell Engraver at the Unicorn the corner of Queen Street in Cheapside, 1755. Engraving with original colour. Very good condition. A wonderful "vue d'optique" of Westminster London with stunning early colour. During the eighteenth century "vues d'optique" or "perspective views" became extremely popular in England and Europe. Like other optical prints they capitalized on a connoisseur market eager for the latest novelty. English publishers such as John Bowles and Robert Sayer had great success with these optical views, which quickly developed into a collecting craze that swept through print shops on both sides of the Channel. "Vues d'optiques" were specifically designed to create the illusion of perspective when viewed with a zograscope or perspective glass. These viewing devices used a series of reflecting mirrors to enhance the illusion of depth in the print, creating a veritable "view" for the onlooker. Typically these prints depicted city or landscape views, and were horizontal in format. They had roughly the same dimensions and were sold with heavy opaque colouring, so as to show the tints when viewed through the lens. In their heyday, optical prints were a technical revolution; they could be seen in almost every fashionable drawing room, and were enjoyed by the poorer classes in print shops or at traveling fairs. For a small fee the citizens of Europe and England could travel the world without leaving their village. The "vue d'optique" was the first medium to bring the visible appearance of the wider world to a large European public. Ironically the artists and engravers who created these prints rarely had first hand knowledge of the scenes depicted, hence the views were often not as accurate as they were advertised to be. As a result of their constant handling optical prints such as these are rare, especially in good condition. They are not only beautiful images but also a fascinating glimpse into the history of printmaking. John Boydell was one of the most influential figures in the history of English printmaking. He was not only an accomplished engraver and an industrious publisher, but also a print seller who came to dominate the English print trade. He is best known as the originator of the Shakespeare Gallery, which made him one of the most successful print-sellers of his time. Clayton, The English Print 1688-1802, 140-14. (Inventory #: 13914)
$750.00 add to cart or Buy Direct from
Donald A. Heald Rare Books
Share this item
Donald A. Heald Rare Books
Offered by