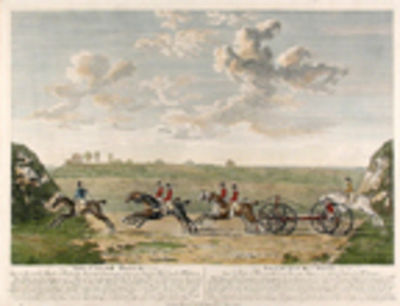 by SEYMOUR, After James (1702?-1752)
[London, 1780. Engraving, with later professional hand-colouring. Cut to edge of plate-mark. A rare print recording a race against the clock when Wright's carriage travelled 19 miles in fifty three minutes and 27 seconds: an average of 22 miles an hour. This extraordinary 'carriage' was built for the Duke of Queensberry and the Earl of Eglinton. They had bet Theobald Taaffe and Andrew Sprowle 1000 guineas that they could not get a carriage 'with four running wheels, and a person in, or upon it, drawn by four horses' to travel nineteen miles in one hour. The print is in two halves: the top shows a view of the carriage at speed, the lower section is a plan of the carriage. The signature 'J. Wright Invt.' implies that he was the designer of the carriage. This print appears to be the rare precursor to a later aquatint, published by J. Bodger. Cf. Mellon British Sporting and Animal Prints p.174; cf. Siltzer p.248. (Inventory #: 13113)
$450.00 add to cart or Buy Direct from
Donald A. Heald Rare Books
Share this item
Donald A. Heald Rare Books
Offered by