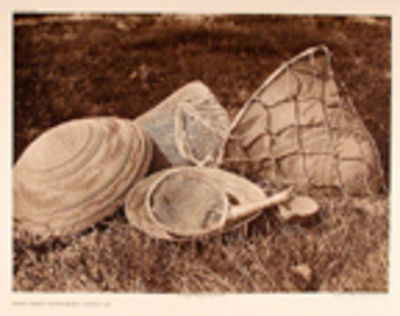 by [CURTIS, Edward Sheriff (1868-1952)
Boston: Suffolk Engraving Company, 1930. Photogravure after Edward Curtis, printed by the Suffolk Engraving Company, wove paper (watermarked 'Van Gelder Zonen Made in Holland'). Excellent condition. A breath-taking image from "The North American Indian", the grandest illustrated work ever produced in the United States, the most important illustrated work on Native Americans, and the single greatest book in Western Americana. Only the double-elephant folio edition of Audubon's "Birds of America" surpasses Curtis in its massive ambition and beauty of execution. "...Because of the singular combination of qualities with which he has been blessed, and because of his extraordinary success in making and using his opportunities... (Curtis) has been able to do what no other man has ever done; what, as far as we can see, no other man could do. He is an artist who works out of doors and not in a closet. He is a close observer, whose qualities of mind and body fit him to make his observations out in the field, surrounded by the wild life he commemorates. He has lived on intimate terms with many different tribes of the mountains and the plains. He knows them as they hunt, as they travel, as they go about their various avocations on the march and in camp. He knows their medicine men and their sorcerers, their chiefs and warriors, their young men and maidens. He has not only seen their vigorous outward existence, but has caught glimpses, such as few white men ever catch, into that strange spiritual and mental life of theirs; from whose inner most recesses all white men are forever barred...." (Theodore Roosevelt, Foreword to Volume I) "The group includes a tight mesh burden basket for seeds, an open mesh burden basket for acorns, and other nuts, two winnowing trays, and a seed beater with which the seeds are brushed from the plant into the burden basket" (Curtis, Frontispiece to Volume XIV). Renowned for their unrivalled basketry skills, the Pomo tribe inhabited Northern California. Edward Curtis was fascinated by the story of the Native Americans from childhood. His in-depth knowledge of the various tribes increased in parallel with his skill as a photographer during his participation in a number of scientific expeditions in the 1890s. In 1896, Curtis began to take photographs of the Native American tribes (by 1930 he had taken over 40,000 negatives of eighty tribes) and evolve his hugely ambitious plan for a comprehensive work which would illustrate his romantic vision of Native American life before the disastrous impact of European contact. With the enthusiastic support of President Theodore Roosevelt (who wrote the foreword to the present work) and the financial backing of J. Pierpont Morgan (Curtis was introduced to him by Roosevelt), the publishing project finally got under way in 1906. Pierpont Morgan died in 1913 just before the completion of the ninth volume, but his son agreed to continue underwriting the project; between them, they eventually contributed about a third of the $1,500,000 cost. What had originally been projected to take five or six years eventually stretched to twenty-three, finally reaching a conclusion in 1930 but leaving Curtis a broken and bankrupt man. Nonetheless, his grand design was completed, and his work remains as his monument. Cf. Naef & Goldschmidt The Truthful Lens 40; cf. Howes C-965. (Inventory #: 10170)
$1800.00 add to cart or Buy Direct from
Donald A. Heald Rare Books
Share this item
Donald A. Heald Rare Books
Offered by