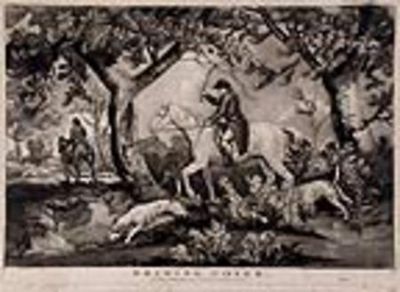 by ANONYMOUS
London: Published by Haines & Son, No. 19 Rolls Buildings, Fetter Lane, 1798. Mezzotint. Printed on wove paper. In excellent condition with the exception of some glue residue on the verso of the sheet. Four vertical creases in sheet. A small abrasion in image. Image size: 9 ¼ x 13 7/8 inches. A bold hunting scene of a rider drawing cover. This early hunting scene follows the tradition of James Seymour by presenting a small format sporting picture in a bold decisive style. The artist and engraver are not recorded on the plate, which was typical of works published at the period by Haines & Son. Haines & Son were prolific publishers and printsellers who catered to the decorative print market, they often republished earlier plates, which they acquired from other publishers, such as Carington Bowles and Robert Sayer. This image, which is listed as plate 2, is most likely the second plate in a set of six prints. (Inventory #: 15285)
$900.00 add to cart or Buy Direct from
Donald A. Heald Rare Books
Share this item
Donald A. Heald Rare Books
Offered by