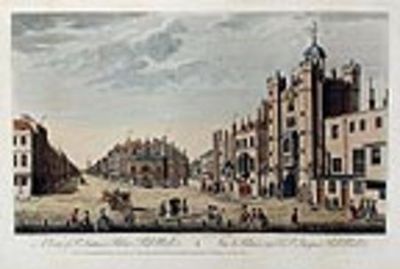 by BOWLES, Thomas (1712-1767)
London: Printed for & Sold by T. Bowles in St. Paul's Church Yard, John Bowles in Cornhill, Robert Sayer in Fleet Street, 1753. Hand-coloured engraving, printed on laid paper. Very good condition apart from some overall light soiling, a few mild water stains in the top left-hand corner, and a small loss in the lower right corner of the sheet. A stunning panoramic view of the façade of St. James Palace and its surrounding architecture. Situated in the borough of Westminster at the southwest end of the main thoroughfare Pall Mall, the palace was built by Henry VIII. It functioned as the primary royal residence in London between 1702 and Queen Victoria's reign. A member of the renowned Bowles family, which monopolized the London print market, Thomas Bowles was a successful printseller and publisher like his brother John. He was also a talented engraver and contributed numerous plates, both of his own original drawings and after those of his contemporaries, to various series including Seymour's Survey of London (1734). He also produced several separately issued engravings that were mostly published by Robert Sayer, the Overtons, and John Bowles. Bowles was particularly productive during the early 1750s, a period during which the popularity and production of topographical views of London were at its height. Cf. Adams, London Illustrated 1604-1851, p. 69; cf. Dictionary of National Biography. (Inventory #: 13451)
$450.00 add to cart or Buy Direct from
Donald A. Heald Rare Books
Share this item
Donald A. Heald Rare Books
Offered by