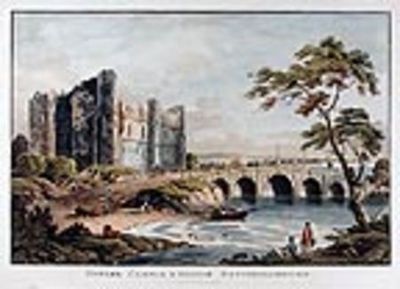 by HAMBLE, J.R.
London: Published by J. Deeley, 95 Bewick St. Soho, 1812. Coloured aquatint. Printed on wove paper watermarked J. Whatman. In excellent condition with the exception of two small mended tears on the right margin. Two small mended tears on upper margin. Crease along left corner. Tiny skillfully mended tear on left margin. Image size: 12 7/8 x 19 1/8 inches. A dramatic view of Newark Castle in Nottinghamshire. The site became a fortified castle during the 12th century when Henry I gave Alexander, Bishop of Lincoln, permission to build ramparts and a moat. The castle was appropriated in 1139 by King Stephen but was reinstated to Lincoln in 1173. In 1216 King John died at the castle and thereafter it was seized by a group of barons. In 1218 Henry III besieged the castle and, after being bombarded in it for eight days, the barons surrendered. Restored and rebuilt in red sandstone by the end of the 13th century, it had become a magnificent fortified mansion. In Tudor times Henry VIII took the castle from Bishop Henry Holbeach and after that it remained in royal hands. During the Civil War, Newark was a Royalist stronghold. It was besieged four times by the Parliamentarians. King Charles I took refuge at the castle before retreating to Oxford, and the town finally surrendered its stronghold. Benezit mentions a British landscape painter by the name J. R. Hamble who was active in London during the early decades of the nineteenth century. He exhibited at rare intervals at the Royal Academy between 1803 and 1824, and was mentioned as an accomplished landscape painter. There is some confusion surrounding an engraver named J. Hamble who executed numerous topographical prints of the English countryside, and it is queried whether these artists are in fact the same person. Le Blanc mentions an engraver by the name of J. Hamble, but fails to list his works. Le Blanc, Manuel de L'Amateur D'Estampes I, p. 340; Benezit, Dictionnaire des Peintres, Sculpteurs, Dessinateurs et Graveurs, vol. 6, p. 703. (Inventory #: 13543)
$750.00 add to cart or Buy Direct from
Donald A. Heald Rare Books
Share this item
Donald A. Heald Rare Books
Offered by