A View of London Bridge taken near St. Olave's Stairs 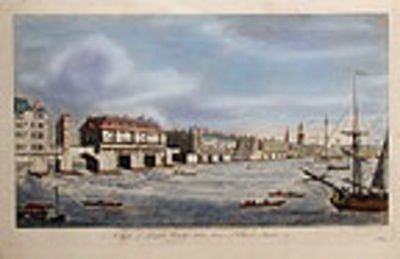 by BOYDELL, John (1719-1804)
London: Published by J. Boydell, 1751. Hand-coloured engraving. Very good condition apart from some overall light soiling, minor foxing, and a mild water stain along the right edge of the bottom margin. Slight discolouration of the paper due to age. Slightly trimmed on the right side. A fine image of London's most famous bridge from Boydell's series of plates "Collection of One Hundred Views in England and Wales," published in 1770. Built on the site of a wooden bridge constructed by the Romans after AD43, the stone London Bridge of Boydell's day was erected in 1176. In between its north and south towers were numerous shops and houses, the rents of which went towards maintaining the bridge. They were later removed as the result of an Act of Parliament instituted in 1756. After years of sustaining heavy traffic, London Bridge was eventually rebuilt in 1825. Towards the middle of the eighteenth century, a trend developed among English artists and printmakers who sought to visually record the natural beauties of England and Wales. Sparked by a sense of national confidence and patriotism, English printmakers began to publish topographical prints of the important sights in the British Isles. In addition to being a visual record of the countryside, they were meant to encourage public recognition of the beauty and history of England. They were aimed at English and foreign tourists who desired a memento of their travels, or at those armchair travellers who collected topographical prints instead of traveling. John Boydell made a name for himself by joining this nationalistic trend and publishing several series of topographical engravings. John Boydell is one of the most influential figures in the history of English printmaking. He was not only an accomplished engraver and an industrious publisher, but also as a printseller he came to dominate the English print trade. He is best known as the originator of the Shakespeare Gallery, which made him one of the most successful print-sellers of his time. Cf. Adams, London Illustrated 16404-1851 47; cf. Clayton, The English Print 1688-1802, pp. 115-116 & 155. (Inventory #: 13432)
$375.00 add to cart or Buy Direct from
Donald A. Heald Rare Books
Share this item
Donald A. Heald Rare Books
Offered by