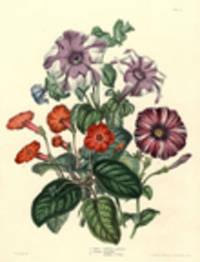 by SOWERBY, Charlotte Caroline (1820-1865)
London: [E.G. Henderson & Son, 1859. Zincograph, coloured by hand, printed by C.F. Cheffins & Sons. A beautiful image from one of the greatest 19th-century female botanical artists, originally published in the very rare 'The Illustrated Bouquet' Charlotte Caroline Sowerby was a member of a highly talented family that was involved at the highest levels in many aspects of natural history publishing in the middle of the 19th century. Unfortunately, at present, little is known of her life other than she was the eldest daughter of the respected conchological artist George Brettingham Sowerby, and that The Illustrated Bouquet, from which the present image is taken, contains her best known work Published by Edward and Andrew Henderson between 1857 and 1864, The Illustrated Bouquet was conceived and executed on a much grander scale than any of the other periodicals of the period. The work is very rare: only one complete set is recorded as having sold at auction over the past twenty-five years. With plates over 14 inches high produced by some of the greatest botanical artists of the time, the work as a whole was a truly spectacular undertaking: the present image is a worthy representative of that splendor, and of the talent of a great botanical artist. Cf. BM (NH) II, p.822; cf. Mass. Hort. Soc. p.137; cf. Nissen BBI 847. (Inventory #: 13118)
$300.00 add to cart or Buy Direct from
Donald A. Heald Rare Books
Share this item
Donald A. Heald Rare Books
Offered by