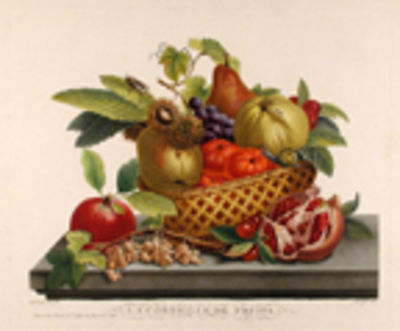 by HUET II, After Jean-Baptiste (b.1772)
Paris: Tessari et Co, 1800. Engravings, printed in colours and finished by hand, by Duthé, after 'Huet fils'. A beautifully composed image recalling the bounty that the Fall brings, after an original by one of the three sons of Jean-Baptistse Huet The beautifully observed wicker-work basket bulges with the fruits of the harvest, their weight has made the container unsteady and some of the contents have spilled out onto the slate shelf on which this veritable cornucopia rests. A snail and a hornet investigate: apples, pears, grapes, chestnuts, cherries, tomatoes, white currents and a pomegranate are all available. This highly decorative image is from an original by 'Huet fils' (i.e. 'Huet son'). This narrows the field to three artists, all members of the highly talented French family whose members were active between about 1740 and 1830. Jean-Baptiste Huet (1745-1811) had three sons, all of whom are possible candidates: Nicolas Huet II, born in 1770, who flourished as an artist between about 1788 and 1827, François Huet, born 1772 and died in London in 1813 and finally, Jean-Baptiste Huet II who was born in Paris on 29 December 1772. Because of the use of 'fils' Jean-Baptiste the second is the most likely candidate. Until his father's death the easiest way to differentiate the two artists of the same name would have been to call the younger 'the son'. (Inventory #: 12880)
$1400.00 add to cart or Buy Direct from
Donald A. Heald Rare Books
Share this item
Donald A. Heald Rare Books
Offered by