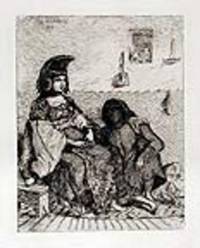 by DELACROIX, Eugene (1798-1863)
Paris: Published by A. Cadart et Luquet, 79, rue de Richelieu, 1865. Etching. Printed on watermarked aqua-fortistes laid paper. State i/iii, before letters with artist's name and date engraved in the upper left corner of plate. Monogram in upper right corner of plate. Full sheet in excellent condition. Image size: 7 7/8 x 6 1/6inches. This stunning image is a rich proof impression of Delacroix's famous print, "Juive d'Alger." In early 1832 Delacroix visited North Africa. He accompanied his friend the Count de Mornay on his good-will mission to the Sultan of Morocco, Abd-er-Rahman II. This experience had a drastic influence on his art, introducing an edge of brilliant realism into his majestic paintings and bold engravings. He filled countless sketchbooks with drawings and observations of Arab life and gathered a wealth of ideas that served him for the rest of his life. This sumptuous etching is inspired by Delacroix's travels in North Africa, and is considered one of his greatest prints. Assigned to the delegation as dragoman was Abraham-Ben-Chimol of Tangiers, a Jew who introduced Delacroix to his wife and daughter. Delacroix was greatly influenced by this encounter and he did a number of images depicting young Jewish women in simple interiors. This breathtaking image depicts a young Jewish woman in traditional dress, seated in a simple room; she is accompanied by an Algerian woman who is seated on the floor beside her. The leader of the French Romantic movement, Delacroix is widely considered to be one of the greatest French painters in history, but he is also one the most hailed printmakers of the modern age. The simple lines and bold textures of this monumental print delineate Delacroix's genius, and distinguish him as a true master of his art. This is an exceptional early impression of this important print, executed before the published title and publication details were added. Included in one of the first collections of the Society de Aqua-Fortistes publications by Cadart, this print is extremely rare in this early state. With its rich dark tones and fresh details, this is a magnificent example of Delacroix's work and a true collector's item. Between 1862 and 1866 the Societe des Aqua-Fortistes produced a five-volume collection of artists' etchings entitled "Euax-Fortes Modernes." Printed on laid paper made especially for the series, this outstanding collection is one of the seminal publications to spring out of the etching revival in France. The Societe des Aqua-Fortistes was the French equivalent of the Etching Club in England and similarly it aimed to produce a collection of high quality etchings by the leading artists of the period. Like the Etching Club, the Societe des Aqua-Fortistes sought to raise the prestige of the medium from a reproductive technique to a fine art. Although the etching revival began somewhat earlier in England, the French movement exerted a far greater influence on the medium, and included a wider range of prominent artists. The Barbizon painters were among the earliest French artists to participate in the etching revival, and their superb prints helped raise the medium to new heights of genius. This unique publication, which included works by Manet, Corot, and Delacroix, is an outstanding example of fine art printing at its best Delteil, Le Peintre-Gravure Illustre, vol. III, no. 18, i/iii; Beraldi, Les Gravures du XIXe Siecle, Guide de l'Amateur d'Estampes Modernes, vol. V, p. 158, i/ii. Benezit, Dictionnaire des Peintres, Sculpteurs, Dessinateurs et Graveurs; Biographical information has been taken from the website of the National Gallery in Washington, and The Metropolitan Museum in New York. (Inventory #: 14621)
$2500.00 add to cart or Buy Direct from
Donald A. Heald Rare Books
Share this item
Donald A. Heald Rare Books
Offered by