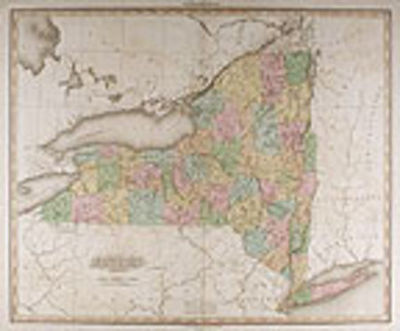 by TANNER, H.[enry] S.[chenck] (1786-1858)
Philadelphia: H. S. Tanner, 1825. Engraved with full, period colour. Mild off-set throughout. Repaired 6" split at bottom of center fold. A fine example of Tanner's updated map of New York Henry Tanner's A New American Atlas, was the most distinguished atlas published in America during the nineteenth century. The maps were carefully constructed from the best and most recent surveys. They were finely engraved on a large-scale, printed on high quality paper, and carefully hand coloured. Because of the great expense involved in the production and publication, the atlas was published in five parts between 1819 and 1823. It was an ambitious project but one clearly called for as the country rapidly expanded. Western New York was among the first "western" regions of the United States on which people speculated. It was generally supposed to be better for agriculture than in fact it was; many farms were abandoned by their owners. One of the major factors in the future prosperity of the state was the Erie Canal, which opened in 1825, the year this atlas was published. The route of the "Gr. Canal" is depicted here as are the major roadways in the state. Phillips, Atlases, 3669-9; cf. Ristow, American Maps and Mapmakers, pp.191-198; Rumsey 2755.009; cf. Sabin 94323. (Inventory #: 10682)
$2000.00 add to cart or Buy Direct from
Donald A. Heald Rare Books
Share this item
Donald A. Heald Rare Books
Offered by