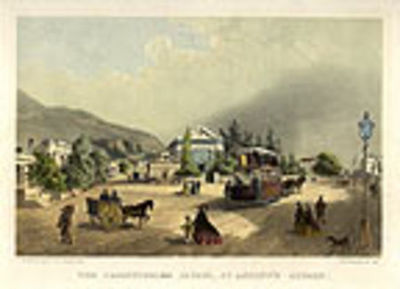 by WALTON, W.L. after Thomas William BOWLER (d. 1869)
London: M & N Hanhart, 1864. Hand-coloured lithograph, heightened by touches of gum arabic. Very good condition. Most likely from Bowler's "Pictorial Album of Cape Town," this plate depicts a scenic view of the St. Andrew Church, otherwise known as "The Scotch Church," on Somerset Road in Cape Town. St. Andrew's was one of the first Presbyterian churches established in Cape Town and one of the first institutions to use natural gas, when in 1842, they installed a small whale-oil gas plant on the premises. A string of gas lamps, a symbol of the town's increasing modernization, are visible along the bustling thoroughfare of Somerset Road. Born in the Vale of Aylesbury, the British landscape painter Thomas William Bowler was one of the most renowned artists working in South Africa during the nineteenth century. After a brief stint as an assistant astronomer in the Cape of Good Hope, Bowler settled in Cape Town, where he established a reputation as a talented artist and drawing teacher. During his life, he published numerous lithographs of Cape Town and the Cape of Good Hope and exhibited several of his drawings at the Society of British Artists in 1857 and the Royal Academy in 1860. Cf. Dictionary of National Biography; cf. Abbey, p, 296; Benezit, Dictionnaire des Peintres, Sculpteurs, Dessinateurs et Graveurs, vol 2, p. 700. (Inventory #: 13373)
$500.00 add to cart or Buy Direct from
Donald A. Heald Rare Books
Share this item
Donald A. Heald Rare Books
Offered by