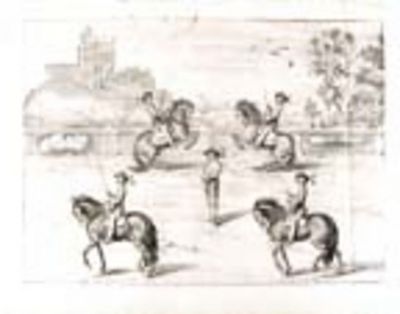 by NEWCASTLE, William Cavendish, Duke of (1592-1676) and Gaspard de SAUNIER
London: J. Brindley, 1743. Copper engraving after Abraham van Diepenbeeck. Very good condition apart from some overall minor foxing, mild creasing, and a few light brown spots in the top of the image and top margin. A fine plate from 'A General System of Horsemanship in All Its Branches', Cavendish's extraordinary didactic work on equestrian dressage. An affluent politician, soldier, and devoted Royalist, William Cavendish fought for Charles I during the English Civil War. He established a riding school in Antwerp with several Barbary horses obtained in Paris, and in 1657, published his revolutionary and influential work on equestrian training techniques, 'La Methode et Invention nouvelle de Dresser les Chevaux'. An English edition was published in 1743 as 'A General System Of Horsemanship In All Its Branches', with beautiful illustrations of Cavendish skillfully training and riding his horses at his Antwerp ménage and his various English estates like Bolsover Castle and Welbeck Abbey. Cf. Brunet I.1700; cf. Mellon Books on the Horse and Horsemanship p. 49; cf. Mennessier de la Lance II, p. 250; cf. Nissen ZBI 849. (Inventory #: 10313)
$325.00 add to cart or Buy Direct from
Donald A. Heald Rare Books
Share this item
Donald A. Heald Rare Books
Offered by