The Death of the Fox. La Mort du Renard 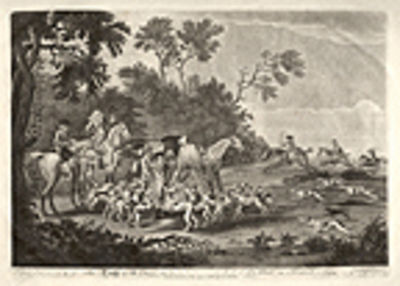 by SEYMOUR, James engraved by Thomas BURFORD
London: Published by Robt. Sayer, 53 Fleet Street, 1787. Mezzotint. Printed on laid paper. In excellent condition with the exception of a skilfully mended tear on left margin not extending near the platemark. Image size: 9 7/16 x 13 3/4 inches. This is a rich impression of this stunning print by Burford after Seymour displaying the capture of a fox. James Seymour is recognized as one of the earliest English sporting artists. He was the son of a wealthy goldsmith and diamond merchant who supplied the plate for racing trophies. His father was also an amateur artist and a member of the Virtuosi Club of St. Luke, a gentleman's club for artists and art lovers. The young Seymour had no formal art instruction but he learnt to draw by studying the pictures and prints in his father's collection. At an early age he was introduced to some of the leading artists of the day, but at the same time he was encouraged to develop a love of the track, which eventually lead to his financial ruin. Seymour was passionate about racing and in addition to drawing and painting them he is believed to have owned racehorses himself. With his prolific output and superior talents he quickly established himself as a successful sporting artist, counting among his patrons Sir William Jolliffe, and the 6th Duke of Sommerset. This wonderful print is the last plate in a set of six fox hunting scenes executed by Burford after Seymour and reissued by Sayer in 1787. As with many sporting prints published by Sayer, he has included a French title with the obvious intention of marketing this extremely attractive print to a European audience. James Seymour was one of the first true sporting artists in Britain; he was considered one of the most eminent horse painters of the age and this beautiful mezzotint by Burford is a testimony to his talent. Siltzer, The Story of British Sporting Prints p. 245-248; Sayer & Bennett Catalogue, p. 27, no. 408. (Inventory #: 12669)
$650.00 add to cart or Buy Direct from
Donald A. Heald Rare Books
Share this item
Donald A. Heald Rare Books
Offered by