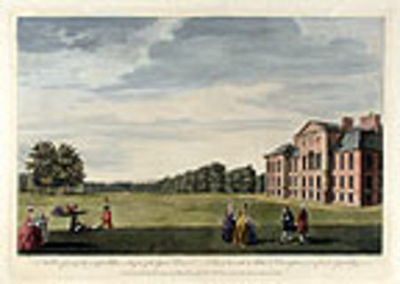 by TINNEY, John (d. 1761) after Anthony HIGHMORE (1719-1799)
London: Robert Sayer and John Bowles & Son, [no date]. Hand-coloured engraving, printed on laid paper backed with a 20th-century archival sheet. Very good condition apart from some light soiling and a 5/8" tear along the bottom edge of a larger skillfully repaired tear that runs through the right side of the image and spans the height of the sheet. A very fine image of Kensington Palace and its expansive grounds. Erected in 1661 for the Earl of Nottingham, Kensington Palace became the royal residence of William III in 1689. Over the years, it underwent various renovations by architects such as Nicholas Hawksmoor and Sir Christopher Wren. The palace was surrounded by an extensive park, the vast grounds of which are pictured here, that was expanded and laid out by the celebrated garden designers Henry Wise and Charles Bridgeman. Visible on the far left side of this beautiful print is one of the formal tree-lined avenues that were characteristic of the park. John Tinney was both an engraver and "a print seller, and carried on business at the Golden Lion in Fleet Street, London, where all his own works were published. His mezzotint plates include portraits of Lavinia Fenton, after John Ellys; George III, after Joseph Highmore; Chief Baron Parker; and John Wesley; also some fancy subjects after Boucher, Lancret, Rosalba, Correggio, and others. He engraved in line a set of ten views of Hampton Court and Kensington Palace, after Anthony Highmore, and some of Fontainebleau and Versailles, after Jean Rigaud. Some of the plates in Ball's Antiquities of Constantinople, 1729, are also by him. Tinney is now remembered as the master of the distinguished engravers William Woollett, Anthony Walker, and John Browne." (DNB) Cf. Dictionary of National Biography. (Inventory #: 13890)
$1200.00 add to cart or Buy Direct from
Donald A. Heald Rare Books
Share this item
Donald A. Heald Rare Books
Offered by