JOHN UPDIKE, A BIBLIOGRAPHY OF PRIMARY AND SECONDARY MATERIALS, 1948-2007 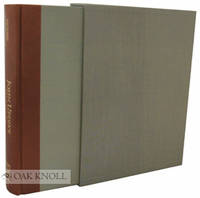 by De Bellis, Jack & Michael Broomfield
New Castle, Delaware: Oak Knoll Press, 2007. quarter leather with slipcase. Updike, John. 8.5 x 11 inches. quarter leather with slipcase. 624 pages (plus nearly 300 pages of text on CD). With "Foreword to my own Bibliography" by John Updike and a CD Supplement. Deluxe issue limited to 125 numbered copies, each signed by John Updike. John Updike is internationally renowned for his novels, short stories, poems, essays and criticism. He has won two Pulitzers, the National Book Award, the American Book Award, the National Book Critics Circle Award, and many other prizes. Updike has written a "Foreword to My Own Bibliography" especially for this book. This definitive guide to materials by and about this prolific American author consists of a printed first volume and a second volume on CD (a first for Oak Knoll Press). The A and B sections of Volume I, concerning separately printed works by Updike and books to which he has contributed, are superb examples of descriptive bibliography. The printed volume also features over 500 grayscale images of book covers, jackets, broadsides, and many seldom seen items. It includes comprehensive listings of Updike's short fiction, poems, articles, essays and reviews, as well as extensive documentation of letters, speeches, dramatic works, manuscripts, interviews, and blurbs. Volume II contains entries for material about Updike and his work (reviews, commentary, and theses), several appendices (media appearances, work read by others, works in translation, exhibits and catalogs), and full-color versions of images appearing in the printed volume. John Updike: a Bibliography of Primary and Secondary Materials, 1948-2007 provides an indispensable guide to Updike's work and commentary about it. Jack De Bellis, professor emeritus of English (Lehigh University), has authored The John Updike Encyclopedia (2000) and John Updike: Critical Responses to the "Rabbit" Saga (2004), as well as several essays and reviews concerning Updike's novels. This bibliography greatly expands his 1994 compilation for Greenwood Press. De Bellis has also published two books on the poet Sidney Lanier, and articles on writers ranging from Shakespeare to Ken Kesey, and from F. Scott Fitzgerald to Truman Capote. His first published work, on Andrew Lytle, was a bibliography. De Bellis was a Fulbright scholar to the University of Toulouse in France. He lives with his wife in Allentown, Pennsylvania, near Philadelphia where he was born. Michael Broomfield, a corporate lawyer by profession, has become, over the past 40 years, a preeminent collector of first editions and other materials by a number of American writers, including Raymond Carver, E.E. Cummings, William Faulkner, Joseph Heller, Robinson Jeffers and many living authors. Collecting work in many forms, Broomfield displays remarkable attention to detail and an acute understanding of the complexities of editions. He has what is probably the most extensive private collection of John Updike materials. This bibliography is Broomfield's first book. He lives in New York City with his wife and their daughter. This special limited issue is bound in quarter leather, includes a slipcase, and features a colophon signed by Mr. Updike. (Inventory #: 92855)
$660.00 add to cart or Buy Direct from Oak Knoll Books
Share this item