HISTORY OF THE LIBRARY IN WESTERN CIVILIZATION: THE MEDIEVAL WORLD IN THE WEST - FROM CASSIODORUS TO FURNIVAL.|THE 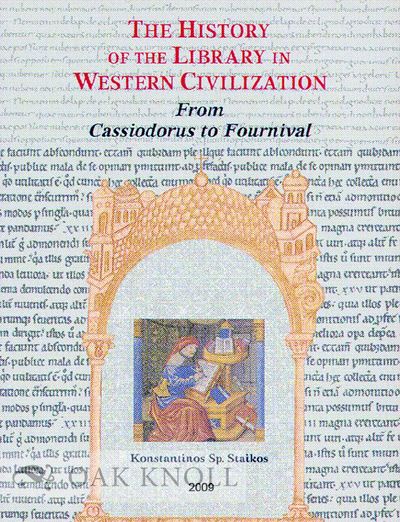 by Staikos, Konstantinos
New Castle, Delaware: Oak Knoll Press and HES & DE GRAAF Publishers BV, 2010. hardcover, dust jacket. 8.5 x 11.5 inches. hardcover, dust jacket. 532 pages. Volume IV. This fourth volume discusses the publishing procedure for secular and religious writings of late antiquity and the factors that led to the impoverishment of the monumental libraries in Rome. New centers of learning grew up in the monasteries, where great libraries containing educational and instructive books and representative works of Christian literature came into being. Monastic libraries were founded throughout Europe, including the regions with Celtic and Anglo-Saxon populations: those at Monte Cassino, Bobbio, St. Gallen, Fulda, Cluny and elsewhere are dealt with extensively. Mention is also made of the libraries founded in universities and of the new philosophy of forming school libraries, as in Bologna and Paris. Eight chapters unfold the events that influenced the tradition of libraries in the West beginning when Christianity was imposed as the official religion of the Empire. The first chapter includes the realignment of populations of the North, the formation of new kingdoms, and the emergence of new intellectual centres. The more general movement of books is contrasted to the reproduction of books with Roman literary works of the Late Roman period and the issue of Christian education is touched upon discussing its models according to the Church Fathers, as well as the ancient personalities who exchanged letters with Christians on the topic of the role played by monastic centres in relation to books. Chapter two presents the practices of authorship and publication, the reproduction of books, and their availability movement according to St. Jerome. An attempt is also made to reconstruct the library of St. Augustine, calculating which books he would have required in order to complete his written works. Lastly, the Vivarium is also described as a model monastic centre, as are the role of the scriptorium and the significance of the Bible in the Christian conscience. The third chapter is devoted to the British Isles: the promotion of regional tribes to kingdoms, the course of their conversion to Christianity, and the nature of the education cultivated in the monastic centres of the period. Mention is also made of the role played by the various local centres in the preservation of ancient literature, and its transfusion by missionaries to Continental Europe from the pre-Carolingian era on. The fourth chapter deals with the Carolingian era, Charlemagne's contribution to upgrading schooling, the foundation of a considerable number of monastic centres based on books, and the chronicle of the founding of Charlemagne's personal library. There is also an extensive description of two major monastic centres of books, St. Gallen and Corbie, as well as descriptions of their scriptorium and library. Chapter five assesses the influence exerted by the Carolingian period in the diffusion of knowledge and books in general and gives examples of the private libraries of men and officials of the Church. The birth of a new family of books is noted as national languages find their place, and educational centres and their libraries are established in cathedrals. The birth of the university in all the European countries is the subject of the sixth chapter, as an unprecedented system in regard to books, and an indispensable tool for education. There is an extensive description of the Sorbonne's college library and of the new teaching methods, comprising theology and a reassessment of the Aristotelian corpus. The interests of eminent men of letters are outlined in chapter seven, in the matter of books and the genesis of the French royal library, with a chronicle of the papal library at Avignon and at Hereford Cathedral. Finally, chapter eight is an overview of the installation of the library as architecture. The diverse bookstands serving as diminutive 'libraries' are described, up to the time when chambers were set aside to function as libraries. Co-published with HES & DE GRAAF Publishers BV, The Netherlands and Kotinos Publications, Athens, Greece. Sales Rights: Worldwide. Order all five volumes of The History of the Library in Western Civilization series at one time and get the Index volume for free. (Inventory #: 76544)
$75.00 add to cart or Buy Direct from Oak Knoll Books
Share this item