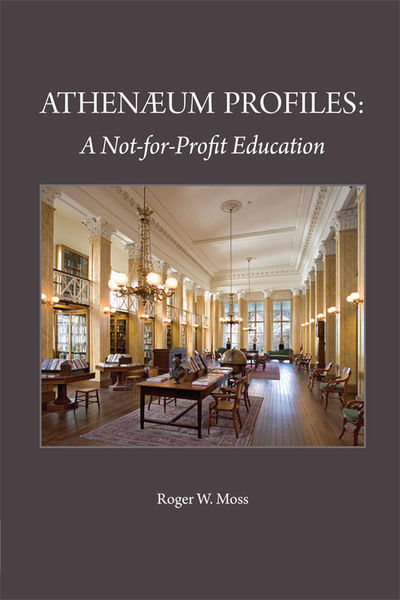 by Moss, Roger W.
New Castle, DE: Oak Knoll Press, 2014. hardcover, dust jacket. 6 x 9 inches. hardcover, dust jacket. 176 pages. Prepared for the bicentennial celebration of The Athenaeum of Philadelphia, Athenaeum Profiles consists of biographical essays covering twelve significant individuals who influenced the future of one of America's oldest cultural institutions. During the author's forty year tenure as executive director of the Athenaeum (1968-2008), he learned on the job from these men how to manage a not-for-profit special collections library as he resuscitated a moribund institution by acquiring nationally significant collections, attracting substantial funding, embracing modern technology, and creating a research website visited by thousands of researchers from around the globe. How the Athenaeum was pulled back from the brink of collapse provides practical lessons for any curator or director facing a similar situation. Profiled here are George B. Tatum, Ph.D., FSAH, University of Delaware architectural historian; Robert C. Smith, Ph.D., University of Pennsylvania art historian and the leading American authority on Portuguese and Brazilian art; Charles E. Peterson, FAIA, FSAH, nationally celebrated architectural historian, founder of the Historic American Buildings Survey, who was responsible for restoring some of America's most important buildings; Robert L. McNeil, Jr., D.Sc., philanthropist and founder of the Barra Foundation; George Vaux, RSA, prototypical "Old Philadelphian"; Nathaniel Burt, FPAT, the celebrated Princeton author; Henry J. Magaziner, FAIA, FAPT, Philadelphia architect and preservationist; Robert B. Ennis, MA, Drexel University art historian; Walter Muir Whitehill, Ph.D., Boston author and authority on not-for-profit institutions; Clay Lancaster, MA, prolific author and historian of Kentucky, New York, and Nantucket architecture and Asian culture; Samuel J. Dornsife, DFA, book collector and interior designer, whose clients included major museums in both the United States and England; Ian Grant, FRIBA, the London-based architect and preservationist, whose clients included the Houses of Parliament, the Wallace Collection, and the British Royal Family. Also discussed are Walter W. Wright, Dartmouth College special collections curator, who introduced the author to the world of rare books; and Roy P. Fairfield, innovative educator and scholar. Dozens of other interesting characters - many of whom readers will recognize - make cameo appearances. Roger W. Moss, Ph.D., is executive director emeritus, The Athenaeum of Philadelphia, an independent special collections library housed in a National Historic Landmark building near Independence Hall. He was simultaneously an adjunct professor in the Historic Preservation Program at the University of Pennsylvania. In 2002 he was elected an honorary member of The Carpenters' Company of Philadelphia, in 2004 he received the James Biddle Award for lifetime achievement in historic preservation from the Preservation Alliance of Greater Philadelphia, and in 2007 he was recognized by the American Institute of Architects for his contributions to the architectural profession by a non-architect. He is the author of more than a dozen books on architecture and design, as well as scores of articles, book introductions, and reports on library and historic site management. His books include Century of Color: Exterior Decoration for American Buildings, 1820-1920 (1981), Victorian Interior Decoration (1986) and Victorian Exterior Decoration (1987), Lighting for Historic Buildings (1988), The American Country House (1990), Paint in America (1994), Historic Houses of Philadelphia (1998), Historic Sacred Places of Philadelphia (2005), Historic Landmarks of Philadelphia (2008), and Richard Shirley Smith: Illustrated Books, Engravings, and Bookplates (2010). (Inventory #: 120345)
$55.00 add to cart or Buy Direct from Oak Knoll Books
Share this item

AUGUST ROSENBERGER, 1893-1980, A TRIBUTE TO ONE OF THE GREAT MASTERS OF PUNCHCUTTING, AN ART NOW ALL BUT EXTINCT

Rochester : Privately printed by the Melbert B. Cary Jr. Graphic Arts Collection , 1996
(click for more details about AUGUST ROSENBERGER, 1893-1980, A TRIBUTE TO ONE OF THE GREAT MASTERS OF PUNCHCUTTING, AN ART NOW ALL BUT EXTINCT)
View all from this seller>