The Gentle Shepherd. A Pastoral Comedy. 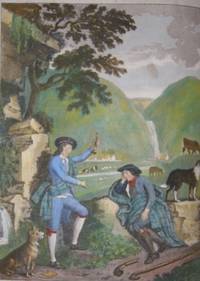 by Ramsay, Allan (1686-1758)
Glasgow: A. Foulis, 1788. First Illustrated Edition. Half Morocco, Marbled Boards. Near Fine. 4to. 30 by 23 cm. iv, x, ii, 111, iii, 17, i, 18 pp. Hand-colored portrait frontis of Ramsay plus twelve hand-colored aquatint plates. Ramsay's enormously successful play dates to 1725. It celebrates rural life, particularly that in Scotland of the day. The principal character of Sir William Worthy is supposedly based on the pretenderJames Stuart. The play employs light Scottish dialect throughout. This edition of the play has an useful glossary of Scottish words, and also eighteen engraved pages of songs (with musical notation) inspired by the play. The light caricature illustrations by David Allan, which are original to this edition, perfectly complement the material, and the coloring, although possibly not arranged for by the publisher, captures the rich lushness of the countryside and its picturesque country folk. Some rubbing to the boards. Light dustsoiling within, and occasional light spotting. (Inventory #: 003086)
$1,400.00 add to cart Available from
White Fox Rare Books & Antiques
Share this item
White Fox Rare Books and Antiques
Offered by