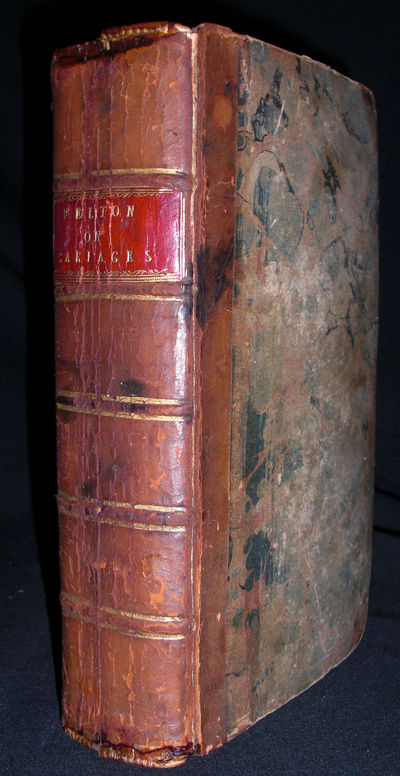 by Felton, William
London. Printed for the Author by J. Debrett. 1794 Bound in Period half-calfskin and marbled boards. Gilt-ruled spine compartments with raised bands. Gilt titled red morocco label. Thick 8vo. 5.5"x 8.25". The First Edition. Bookplate of Joseph T. Cunningham to front pastedown. Illustrated by 53 engraved plates, 9 of which are folding. Felton's classic work traces the early development of carriage building and the merging of carriages into cultural trends. Widely regarded as the most comprehensive and definitive work on the subject and associated disciplines; purchase, maintenance, and repair, coach-smithing, coach-painting, coach-trimming, and coach harness-making, etc. A monumental and historic work which provides vast cultural insight, as well as historical perspective from which the evolution of modern motorized transportation may be traced.Joseph T. Cunningham (1843-1914)Was the President of James Cunningham, Son and Company of Rochester , New York, inheriting that position upon the death of his Father and Company founder, James, in 1886.Under his guidance, Cunningham grew to become the preeminent carriagemaker in the United States. Favored both for their hand crafted quality and their style, Cunningham coaches were the preferred conveyance of both personal owners and coach liveries throughout the country.With the dawn of the 20th century,Joseph foresaw the necessity to switch to the production of horseless carriages, Cunningham started automobile production in 1908 with gasoline-engined cars. that sold at approximately $3,500, a very high price at the time.The distinguished Cunningham motor cars of pre—depression years were primarily handmade with materials of highest quality, as well as obsessive attention to detail and luxury.They were rightfully called the "American Rolls Royce" and at $9,000 in 1920, were priced as such. Cunningham owners were a veritable Who's Who of the World's political, business and entertainment elite as well as Indian princes, European royalty, Latin American millionaires and politicians, Japanese industrialists, and even Chinese warlords.The company also ventured into design and production of Military vehicles, including prototyping of early tanks as well as construction of the first M1 Armored car.Joseph Cunningham retired from the Company in 1909. To this day, the name Cunningham is synonymous with the most elegant and advanced examples of carriage and automobile transportation.  Covers variously rubbed can cracked at joins but well situated and very firmly attached by cords.Corners bumped. Head and tailpieces chipped. Plates are generally very crisp and bright with some incidental and sporadic mild staining and offset. Several of the folding plates present usual marginal chips and or short tears from repetitive use or bad trimming, most particularly Plate 6.Several plates trimmed a bit short. A Very Good, firm and sound copy. (Inventory #: 8837)
$3,000.00 add to cart or Buy Direct from
Heldfond Book Gallery
Share this item

The Heldfond Book Gallery is an elected member of the Antiquarian Booksellers Association of America and the International League of Antiquarian Booksellers and conforms to all ethical codes and standards of those organizations.Books found to be materially mis-described may be returned within seven days of receipt and all monies will be promptly refunded, if returned to us in the same condition as sent.
More from this seller

The Battle of Leyte Gulf - A Gathering of Original Combat Despatches and Various Original Ephemera From History's Greatest Naval Battle.


(click for more details about The Battle of Leyte Gulf - A Gathering of Original Combat Despatches and Various Original Ephemera From History's Greatest Naval Battle.)

London. : Macmillan & Co. , 1888.
(click for more details about Wessex Tales. Stange Lively and Commonplace)
View all from this seller>