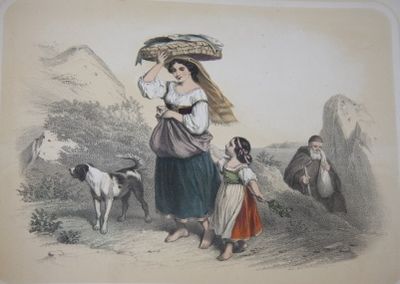 Paper pastedown on boards
Paper pastedown on boards. Good Plus. N.d., circa 1850. Oblong, 22 by 34 cm. 20 tinted plates with people and their clothing colored. The album is of the type that a collector would have assembled and had bound at the print shop where he gathered the plates. A number of the plates explicitly depict Italian peasants and fishermen, while others one can tell are of Italians of the day based on dress. But other plates take us to Brittany, the Lowlands and France, and one outlier of a plate shows soldiers in the Sahara escorting a maiden. All the illustrations are picturesque, with their subjects being children, hunters, animal husbandry, etc. Brief captions describing the subjects are rendered in English, French, German and Dutch, suggesting these were prints marketed to the tourist trade. The album itself is decorated with a colorful floral garland. Its white paper pastedown is now heavily soiled, and the spine has been rebacked with cloth, but it remains an attractive cover. The margins of the plates have some finger smudging, giving a slightly grubby appearance to the leaves, and a few plates have a dampstain in an inner corner. One small closed tear. Generally the pictures are unaffected. (Inventory #: 003187)
$485.00 add to cart Available from
White Fox Rare Books & Antiques
Share this item
White Fox Rare Books and Antiques
Offered by