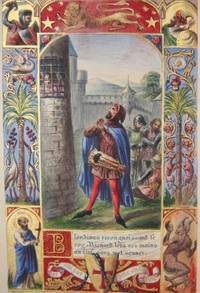 by Clerc, Jacques Gondar. F.[rancisque] Michel. Charles Nodier.
Paris: Louis Janet, 1830. First Edition. Velvet on Boards. Full Morocco Slipcase. Near Fine. 12mo. 16.5 by 10.5 cm. clvii, 44, [1] pp. With five hand-colored and illuminated plates, including title, plus illuminated devices and decoration elsewhere. While the plates are printed, the coloring and illumination is such that it is a fine simularcrum of manuscript illumination. This work is in fact a literary hoax, simulating a Medieval Romance but in fact penned by Michel and promoted by the extensive notes and annotations that follow the chronicles. The leaves are a light vellum, and this edition was issued with luxuriant, unusual bindings such as the navy blue velvet of this one. (Inventory #: 003188)
$2,500.00 add to cart Available from
White Fox Rare Books & Antiques
Share this item
White Fox Rare Books and Antiques
Offered by