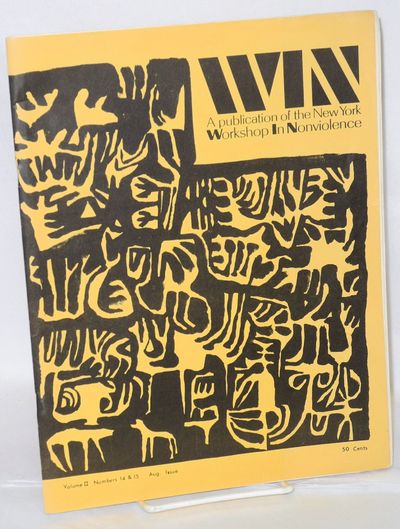 by [Workshop in Nonviolence]
New York: New York Workshop in Nonviolence, 1966. Double issue of the radical pacifist newsletter, 8.5x11 inches in wraps, 51p., very good. This issue contains a large dose of poetry, brilliantly capturing the pivot from the civilrights movement to the antiwar movement; also has the text of a film script by Donald Newlove, "The expensive condemned man," Paul Johnson's short story December Snow, Spencer Host's "Wisher," and updates on direct action events to protest the war in Vietnam. An interesting report from Chicago discusses efforts by nonviolent activists to understand and figure out how to work in gang-ridden neighborhoods. (Inventory #: 186224)
$15.00 add to cart or Buy Direct from Bolerium Books
Share this item