A brief biography of Margarita M. Freixas written by her husband 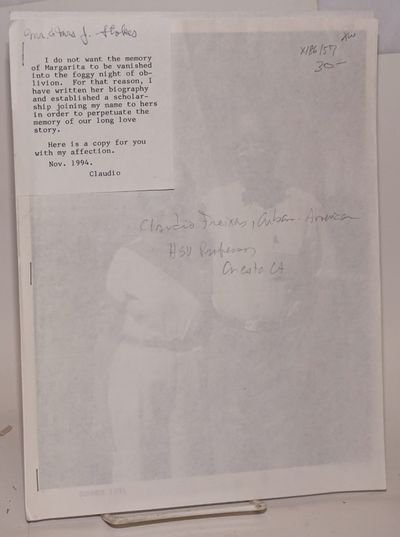 by Freixas, Claudio J.
[Arcata, CA]: Self-published by the author, 1994. 12p. 8.5x11 inch sheets stapled along left side, photo-copy, illustrated with a b&w frontis of the husband and wife, photo-copied newsclippings at rear, short typed note attached front. A short biography of his wife by the exiled Cuban American professor living in Arcata at the time of his wife's death. Four-page transcription of a tape she recorded for her children concerning the early days of her exile from Cuba to Miami in November 1961. Claudio had to remain behind as the US feared invasion by the Cuban males. (Inventory #: 186157)
$25.00 add to cart or Buy Direct from Bolerium Books
Share this item