Three Meals a Day: A choice collection of valuable and reliable recipes in all classes of cookery and a comprehensive cyclopedia of information for the home ... and a thousand facts worth knowing. [WITH] Die Tafel und die Kuche, ein sammlung.. 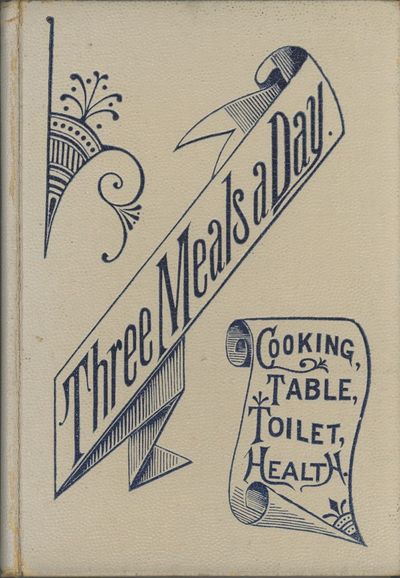 by [Sample Book]. Cooke, Maud C.
Chicago, IL: Educational Company, 189[7?]. Octavo, selected pages [70 leaves], illustrated frontispiece, engraved illustrations. Oil cloth covers, decorated endpapers. text in English and in German. Salesman's sample book, advertising English and German editions, for a subscription publication; postdating editions issued by North American in 1887 and by Acme in 1892, and antedating an enlarged edition published by The Educational Company in 1902. Maud C. Cooke, was a popular and prolific author of middlebrow books on etiquette, social comportment, hygiene, and housekeeping, in competition with perhaps better-known authors covering similar ground such as Virginia James and Marion Harland. In the case of Three Meals A Day, the subscription was handled by J.S. Ziegler & Co. of Chicago. The audience for the German edition would have been the Central-European immigrants settling at an accelerated rate from Pennsylvania and Ohio to Wisconsin and Ontario. At the same, the recipes advertised here, representing an anticipated 2,500, were not to be considered foreign: "Does not use French or foreign terms, but is a book for the American people," assured the Ziegler Company. And for those who might be worried: "It has no recipes taken from Italian, India[n], or Cuban authorites." The thirty-three "departments" under which the recipes are to be gathered include: Marketing, Carving, Soups, Fish, Game, Poultry, Meats, Hash & Croquettes, Eggs, Condiments, Garnishes, Vegetables, Bread, Fritters, Pastry, Cake, Puddings, Preserves, Jelly, Summer Desserts, Creams, Ice Creams & Sherbets, Table Drinks, Fruits, Pickles & Vinegar, Home-made Candies, French Candies [!], The Table, Housekeeping, Invalid Cookery, Health, The Toilet, Miscellaneous. Age toning to text block, otherwise very close to fine, in publisher's decorative white oil cloth. [OCLC locates no copies of the sample, and four copies of an "1890s" edition published by The Educational Company]. (Inventory #: 3208)
$250.00 add to cart or Buy Direct from
Rabelais: Thought for Food
Share this item