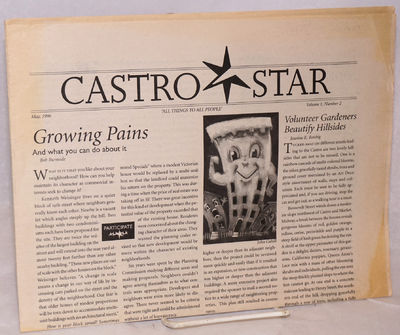 by Burnside, Bob, editor, Berenice Palmer, et al.
San Francisco: Castro Star, 1996. Newspaper. 8p. folded tabloid paper, photos, ads, features, poetry, toning at folds and edges otherwise very good on newsprint. Second issue of the Castro District paper which only lasted until December 1997 when it merged with the Western Edition continuing the numbering of the latter and renaming the paper The San Francisco Observer. This paper was bought in 2003 and renamed Castro Star in 2004 beginning with Vol. 1, Issue 1 April 2004. Articles about the the bike lane on Market and bike activists ticketing double-parked cars, event listings etc. (Inventory #: 186407)
$20.00 add to cart or Buy Direct from Bolerium Books
Share this item