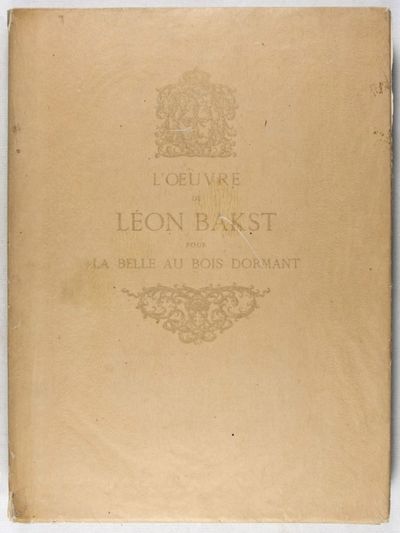 by Bakst, Léon; André Levinson (Preface by); Maurice de Brunoff (Ed.); Picasso
Paris: Maurice de Brunoff, 1922. Limited First edition. Paperback. g to g+. 1/500. Folio. [8], 21, [3]pp (text), 54 leaves (plates). Uncut. Original glassine on decorative and printed dust-jacket over blind wrappers. Book housed in its original decorative green paper covered slipcase, with gold lettering and decoration on spine and along joints. Raised bands. Limitation page signed by both Léon Bakst and Editor Maurice de Brunhoff. Color illustration pasted on title page. Stunning lithographic frontispiece portrait of Bakst after a drawing by Picasso. Decorative head-, tailpiece, and initial. In 1921, the opportunity arose for Sergei Diaghilev, the renown Russian ballet impresario and founder of the Ballets Russes, to present Tchaikovski's "La Belle au Bois Dormant" at the Alhambra Theatre, in London using the notes that the Ballet Master Nicholas Sergeyev had kept from pre-Revolutionary Russia. It was to be a production of great magnificence designed by Léon Bakst, and the first time the typically Russian, full-length ballet (in five scenes) would be performed in England. Petipa's choreography, preserved through the use of Stepanov notation, was restaged by Nicolas Sergueev, stage manager for the Maryinski Theatre. Bronislava Nijinska, younger sister to Nijinski and also a dancer and choreographer, adjusted several enchaînements and supervised the whole show. Olga Spessivtseva was Aurora, Pierre Vladimirov, the Prince, and Lydia Lopokova alternated with Bronislava Nijinska in the role of the Lilac Fairy. Stanislav Idzikowski proved to be a brilliant Blue Bird. Carlotta Brianza, who had created the title role of Sleeping Beauty in 1890 in Saint Petersburg, played Carabosse this time. The superb scenery and costumes were designed by Léon Bakst. This stunning signed limited first edition contains the complete 54 mounted color plates depicting the exotic, sumptuous, and richly colored costumes and sets designed by Bakst for this memorable London performance. His ingenious designs, in conjunction with Diaghilev's radical and provocative choreography, helped revitalize ballet and lay the framework for modern interpretive dance. Each of the mounted color plates measures 15 1/4 x 11" (image appr. 10 1/2 x 6 3/4"), and is protected with a captioned tissue guard. One of 500 copies, of which this is No.358. Gold lettering and decoration partly faded on slipcase. Water staining on boards. Glassine age-toned and chipped at tail of spine. Creasing along dust-jacket's spine. Wrappers intact. Book block separating. 11 plates loose. Moderate and sporadic creasing on tissue-guards. Text in French. Slipcase and glassine in overall fair to good, dust-jacket in good, wrappers and interior in good+, plates in very good condition. (Inventory #: 37572)
$5,000.00 add to cart or Buy Direct from
Eric Chaim Kline Bookseller
Share this item