The Croker Papers. The Correspondence and Diaries of the Late Right Honourable John Wilson Croker, LL.D., F.R.S., Secretary to the Admiralty from 1809 to 1830. (Three Volumes) With Portrait. 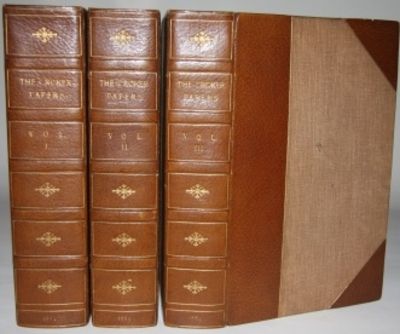 by Jenkins, Louis J., ed.
London: John Murray, 1885. Second edition. Half Morocco. Very Good Plus. A "Grangerized" copy -- extra-illustrated and augmented with many original letters and autographs by a virtual who's who on the English political and literary scene of the day tipped into the text. Among these are Sir Robert Peel, the Duke of Wellington (when he was known as Arthur Wellesley and the Field Marshall in Spain), George Canning, Lord Holland, Richard Brinsley Sheridan, Isaac Disraeli, Queen Victoria, Sir Charles Napier, Lord Melbourne, the Duke of Newcastle, Gladstone, Lord Bentinck, Lord John Russell. Also included is a short inscription from Metternich. In addition, there are a total of 157 extra plates. Occasional light fox marks, and minor soiling on the boards. (Inventory #: 003220)
$2,800.00 add to cart Available from
White Fox Rare Books & Antiques
Share this item
White Fox Rare Books and Antiques
Offered by