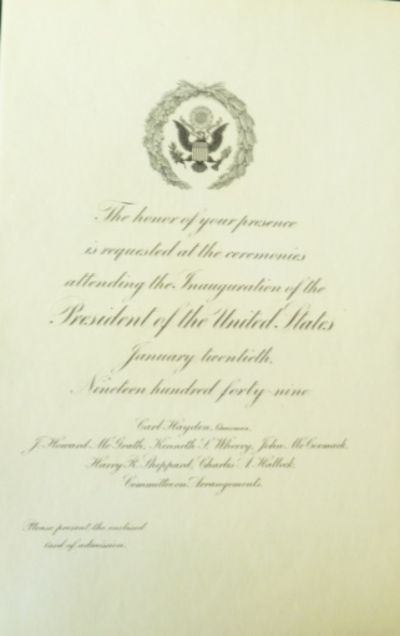 by TRUMAN, HARRY S.
Washington, D.C.: Committe on Arrangements, 1949. A small collection of items from the Inauguration Ceremonies of Harry S. Truman, January 20, 1949. Included are an engraved invitation with envelope, a ticket to the President's Platform with envelope and same number as the engraved invitation, and an admission ticket to Stand 8 north of the Treasury. (See photos). A rather scarce bit of Presidential ephemera, well-preserved.. First Edition. Nearly Fine. (Inventory #: 013506)
$200.00 add to cart Available from Glenn Books
Share this item
Glenn Books
Offered by

THE WORKS OF THE ENGLISH POETS

London : J. Davis, for J. Buckland et al , 1790
(click for more details about THE WORKS OF THE ENGLISH POETS)

THE WORKS OF THE ENGLISH POETS

London : T. Spilsbury and Sons, for J. Buckland et al , 1790
(click for more details about THE WORKS OF THE ENGLISH POETS)
View all from this seller>