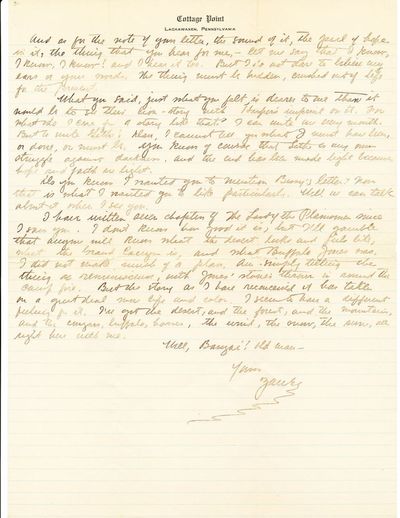 by GREY,ZANE
A poetic tribute to friendship, with information on his writings. "To Alan... I have never had a friend... I have always been a little afraid of you... because I liked you and was afraid you would soon see through me, and regarding me as an opaque, substanceless [sic] shadow, pass me by... I never thought of being different from my real self... I said, ‘If he is ever to like me at all, it must be with bad and all!'" Grey notes that he never cared what anyone thought of him, but that he "did care what you thought." He refers to his wife, Dolly (Lina Roth): "She is a woman and thinks me a hero, and you are a man and know that I am not." He further elaborates on his meeting Alan and becoming his friend in a very romanticized manner: "Such glimpses as I have had myself in some gray sleepless morning hour... twilight lonesome... have bewildered and terrified me. I have seen a calm, deep, star-studded pool and I have seen a maelstrom. So here's to the day I blindly broke into your office, broke in when the world was dark... the day I broke in, to find a friend...." And further, "What you said... is dearer to me than to see this lion-story with Harper's imprint [referring most likely to The "Last of the Plainsmen" which was not published by Harper's]." He talks of his "struggle against darkness" made light because "hope and faith are light." The letter concludes with details of his writing. "I have written seven chapters of The Last of the Plainsmen [published 1908] since I saw you. I don't know how good it is, but I'll gamble what the desert looks and feels like... the Grand Canyon... what Buffalo Jones was... simply telling the thing as reminiscence... But the story... has taken on a new life. I seem to have a different feeling for it... I've got the desert, and the forest... the wind... the sun, all right here with me." Signed, "Well, Banzai! Old Man - Yours Zane.". "The Last of the Plainsmen," published in 1908, is based on the adventures of the western guide and hunter known as Buffalo Jones (Charles Jesse Jones). (Inventory #: 2574)
$1,850.00 add to cart or Buy Direct from
Schulson Autographs
Share this item

Donald Duck yells at Dennis the Menace in this Original Sketch Signed, 4to, Jan. 25, 1991


(click for more details about Donald Duck yells at Dennis the Menace in this Original Sketch Signed, 4to, Jan. 25, 1991)

Photographs. Set of four press photographs announcing Hemingway was very much alive after a plane crash in Africa, January 1954


(click for more details about Photographs. Set of four press photographs announcing Hemingway was very much alive after a plane crash in Africa, January 1954)
View all from this seller>