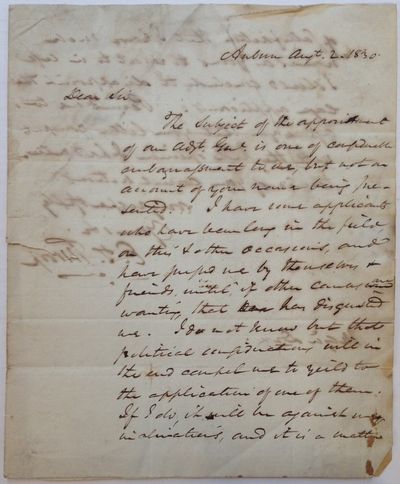 by THROOP, Enos T. (1784 - 1874)
Auburn, NY, 1830. unbound. 2 pages (front and back), 9.75 x 8 inches, addressed on the back of an accompanying blank page, Auburn, New York, August 2, 1830. Written by the tenth Governor of New York to John A. Dix, who distinguished himself as a Union Major General in the Civil War and later became New York's Governor himself, in part: "...I have some applicants who have been long in the field on this & other occasions...I do not know but that political complications will in the end compel me to yield to the application of one of them...it's a matter of satisfaction that I have such names as yours to resort to, in case I should conclude to disappoint the eager applicants..." The ink from each page shows through on the other side; several closed tears; chip caused by a wax seal; minor staining. Good condition. (Inventory #: 249871)
$300.00 add to cart or Buy Direct from
Argosy Book Store
Share this item