Life in a Common Gun: An Informal Book of Communications. 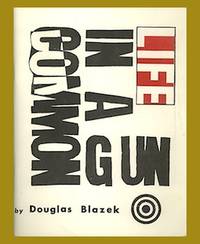 by BLAZEK, Douglas.
Madison: Quixote,, 1968.. First edition, second issue.. [72 pp]. Very near fine in stapled wrappers. Letters from Blazek to Don Cauble, Pete Larouche, Willie, and Brown Miller. A small number of copies were spiral-bound, but was quickly deemed too expensive and abandoned in favor of staples. DenBoer A4. (Inventory #: 14019)
$35.00 add to cart Available from
Jeff Maser, Bookseller
Share this item

by ELUARD, Paul and André Breton.

London: Atlas Press, , 1990.
(click for more details about The Immaculate Conception.)
View all from this seller>