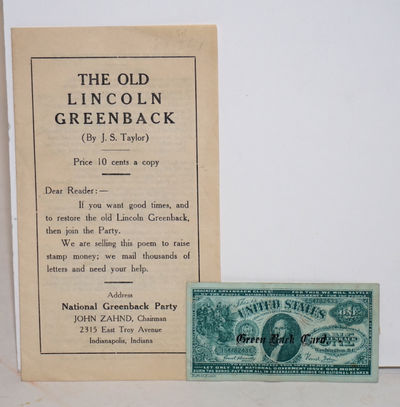 by Taylor, J.S.
Indianapolis, Indiana: National Greenback Party, [193-?]. Four-panel brochure containing Taylor's four-stanza poem and an uncredited piece, "Twin Ballots," very good. Also included is a small facsimile Greenback banknote, slightly smaller than a business card, which has been removed from an album and has paper pasted to the reverse; this may be from the earlier incarnation of the Party. Includes a request for funds to restore the party, which saw its heyday some six decades earlier. Undated, but mentions John Zahnd as Chairman. Zahnd was active in numerous third party endeavors, including a presidential run on the National Party ticket in 1932 with suffragist Florence Garvin as his VP candidate, and again in 1936 on the Greenback Party ticket. (Inventory #: 187220)
$25.00 add to cart or Buy Direct from Bolerium Books
Share this item