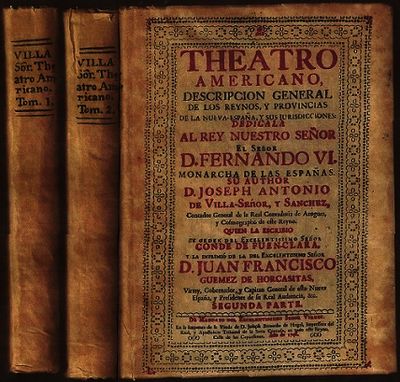 by Author: Villaseñor y Sánchez, José Antonio (1703-1759)
Description:
2 volumes. Royal octavo (9 1/4" x 6 3/4") bound in facsimile velum with title printed in red and black on covers and horizontally ink lettered. Introduction by Francisco Gonzalez de Cossio. From the library of George M Foster. Second edition limited to 500 copies of which this is number 13.
José Antonio Villaseñor y Sánchez was an 18th-century geographer, historian, and mathematician in New Spain. He was born in San Luis Potosí, México and studied at San Ildefonso in Mexico City. He became an accountant, and later official cosmographer (geographer) of New Spain. By order of Philip V, the viceroy of New Spain, Conde de Fuenclara, was commanded in 1740 to have a report prepared on the true condition of the provinces of his jurisdiction. He commissioned José Antonio Villaseñor y Sánchez to prepare the report. Villaseñor occupied a number of important posts: official mayor of the Contaduria de Reales Tributos, contador general de la azogues, and cosmographer of New Spain. He wrote a number of works of mathematical and astronomical interest. The outcome of this commission by Fuenclara was the Theatro Americano, descripción general de los reinos y provincias de la Nueva España y sus jurisdicciones. It appered in two volume in 1746 and 1748. The first volume contains introductory chapters on pre-Spanish and Spanish history of Mexico, followed by a jurisdiction-by jurisdiction description of the archdiocese of Mexico and diocese of Puebla. The second volume continues the description for the diocese of Puebla. The second volume continues the description for the diocese of Michoacán, Oaxaca, Guadalajara and Durango. The work comprehends a great mass of data regarding the ethnology and population of the Mexican provinces in the mid-18th century. Handbook of Middle American Indians.
George McClelland Foster, Jr born in Sioux Falls, South Dakota, on October 9, 1913, died on May 18, 2006, at his home in the hills above the campus of the University of California, Berkeley, where he served as a professor from 1953 to his retirement in 1979, when he became professor emeritus. His contributions to anthropological theory and practice still challenge us; in more than 300 publications, his writings encompass a wide diversity of topics, including acculturation, long-term fieldwork, peasant economies, pottery making, public health, social structure, symbolic systems, technological change, theories of illness and wellness, humoral medicine in Latin America, and worldview. The quantity, quality, and long-term value of his scholarly work led to his election to the National Academy of Sciences in 1976. Virtually all of his major publications have been reprinted and/or translated. Provenance from the executor of Foster's library laid in.
Condition:
Foster's stamp to front limited page, some wear to edges, small linear tear at spine head of volume 2 else a very good copy. (Inventory #: CA0250)
$1,500.00 add to cart Available from Book Collector
Share this item
The Book Collector, Inc
Offered by