Visions and Memories : 28 Linoleum Blocks by Henry Evans [PLATES NUMBERED AND SIGNED BY THE ARTIST] 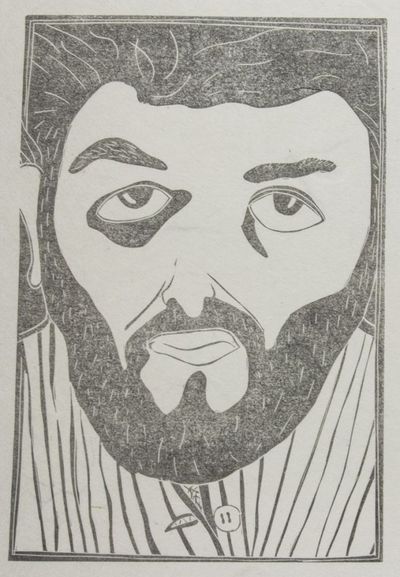 by Evans, Henry (Illustrator)
San Francisco: The Porpoise Bookshop, 1961. Limited First edition. Softcover. vg. 1/26. Elephant folio. Unpaginated. [32]pp. Original decorative wrappers with black lettering on front cover. Striking collection of 28 linoleum blocks, of which 26 are in color. Each print is mounted, numbered, dated and signed by the artist. One of 26 unnumbered copies printed by Henry Evans at the Peregrine Press "Per Mano. Con Amore." Wrappers and interior in overall very good condition. About the artist: Henry Evans (1918-1990) began making botanical prints in 1958, depicting some 1400 subjects in 31 years. In that time, he was accorded more than 250 one-man shows in many countries around the world and, almost every state in the union. Admired by art lovers and naturalists alike, Henry's work reveals a style intriguingly personal and botanically faithful, unerring in its feeling for rhythm and design. Self-taught as a printer, botanist, and artist, he developed a unique style and technique. He drew directly from living subjects, and all subjects were portrayed life-size. He used linoleum as a printing surface and an 1852 Washington Hand Press to make the prints. All of the work was done by hand. All of the materials that were used were of the best quality, and all of the editions were limited. Each linoleum-block print was numbered, dated, and signed by the artist. After printing, the blocks were destroyed. Henry Evans's linocuts are found in the great print collections of the Albertina in Vienna, the Library of Congress in Washington, and the New York Public Library; in various museums and libraries across the country; and in numerous private collections in America and abroad. (Inventory #: 38041)
$2,500.00 add to cart or Buy Direct from
Eric Chaim Kline Bookseller
Share this item